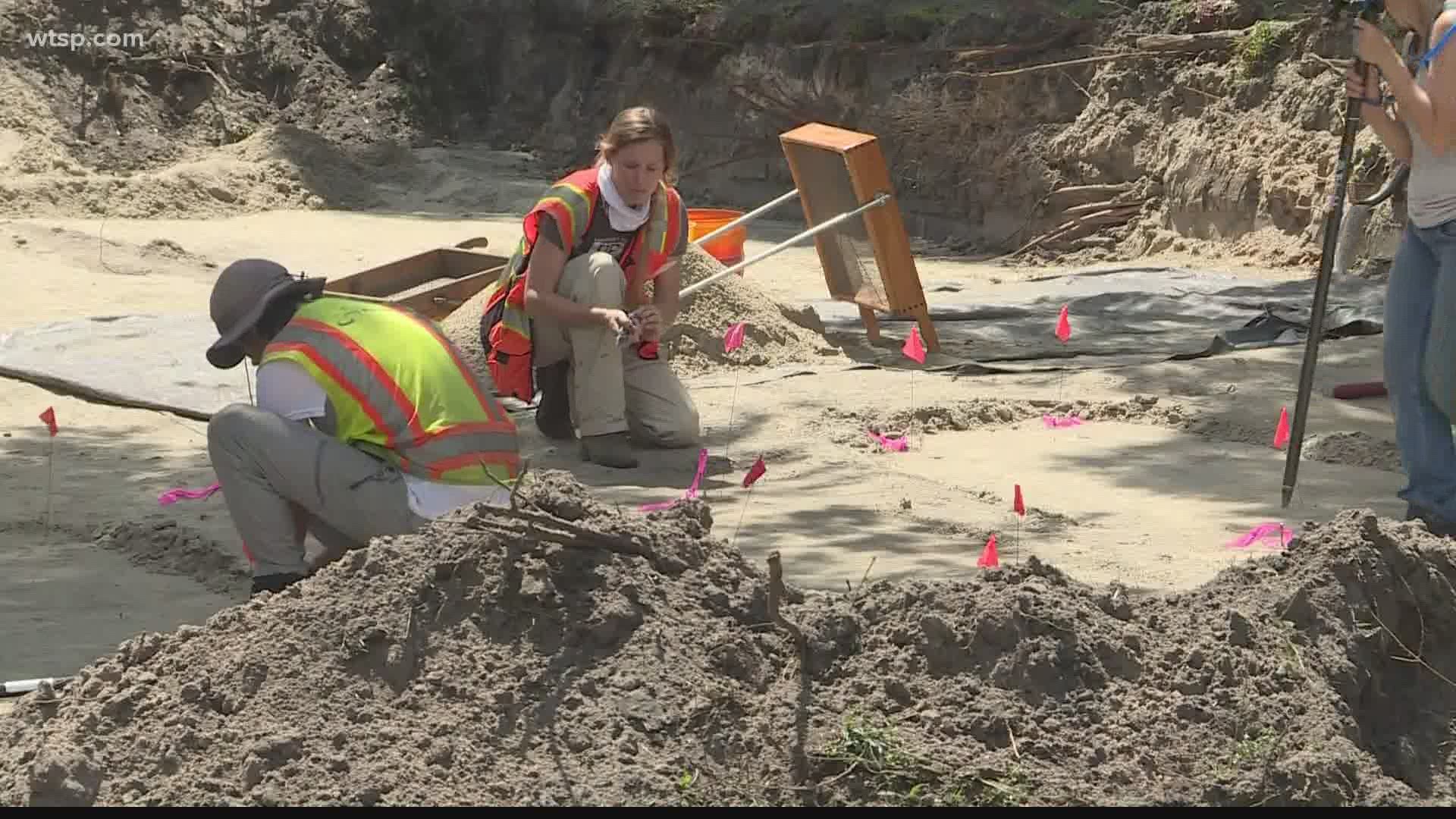 TAMPA, Fla — When archaeologists began carefully excavating at Robles Park Village in Tampa this week to confirm the presence of grave shafts from a century-old Black cemetery that was destroyed for redevelopment, Connie Burton felt a deep wave of hurt.

“I'm just thinking, ‘How many graves were disturbed so all of this could be built? How many? Such a lack of humanity,” said Burton, a former resident who lived at Robles Park for 20 years.

Burton now sits on the committee guiding the process for what will happen next with the burial ground.

Today, the cemetery is located mostly underneath the Tampa Housing Authority’s Robles Park Village property along Florida Avenue. According to ground-penetrating radar results from archaeologists with Cardno and the University of South Florida, graves from Zion also sit underneath property belonging to Tampa businessman Richard Gonzmart and Sunstate Wrecker Service.

"We want accountability. We want reparation. We want redemption for the damage that was done to our community,” Burton said.

Archaeologists said Tuesday they have confirmed between multiple grave shafts from the cemetery. Ground-penetrating radar previously revealed there are nearly 300 graves underneath all three properties.

Archaeologists said they will not disturb the remains, nor will they dig to confirm every single grave.

"We've only confirmed about 10, but that's okay because just confirming those ten shows that the rest of the data is accurate,” said Eric Prendergast, senior archaeologist for Cardno and principal investigator for the Robles Park Village project.

Zion Cemetery is believed to be one of the first, if not the first burial ground for African Americans in Tampa. Through a series of land ownership changes, archaeologists said the cemetery was sold and parceled off for redevelopment. Robles Park Village was built on top of it for what was then a whites-only community.

In the 1950s when Robles Park was being built, crews came across three caskets, but construction continued anyway.

"There's so many examples of a system of institutionalized racism that allowed this to happen,” Prendergast said. “As white landowners would come forward through various mechanisms to seize the land, and the landowners would take it to court, the judge would just dismiss it."

Burton said these types of injustices have been inflicted upon African Americans throughout the history of this country, and the outrage seen today in protests over racial discrimination is a reflection of the bottled-up frustration among many in the Black community.

"What we see in terms of the heavy protests, it speaks to this,” Burton said. “It speaks to how a government locally, and even 100 years ago, has not stepped up to be accountable for what has happened [and] has not talked about how they plan on ending the ongoing misery that a community continues to feel."

Crews will be on-site through next week working to confirm areas with grave shafts. The city of Tampa and the state legislature have each committed $50,000 to restoration and/or memorial efforts.

The city encouraged the creation of a non-profit, but archaeologists fear that it is not a sustainable model that will allow the cemetery to exist in perpetuity.

Emerald Morrow is a reporter with 10 Tampa Bay. Like her on Facebook and follow her on Twitter. You can also email her at emorrow@wtsp.com. To read more about the search for lost African American burial grounds in the Tampa Bay area, head to wtsp.com/erased.