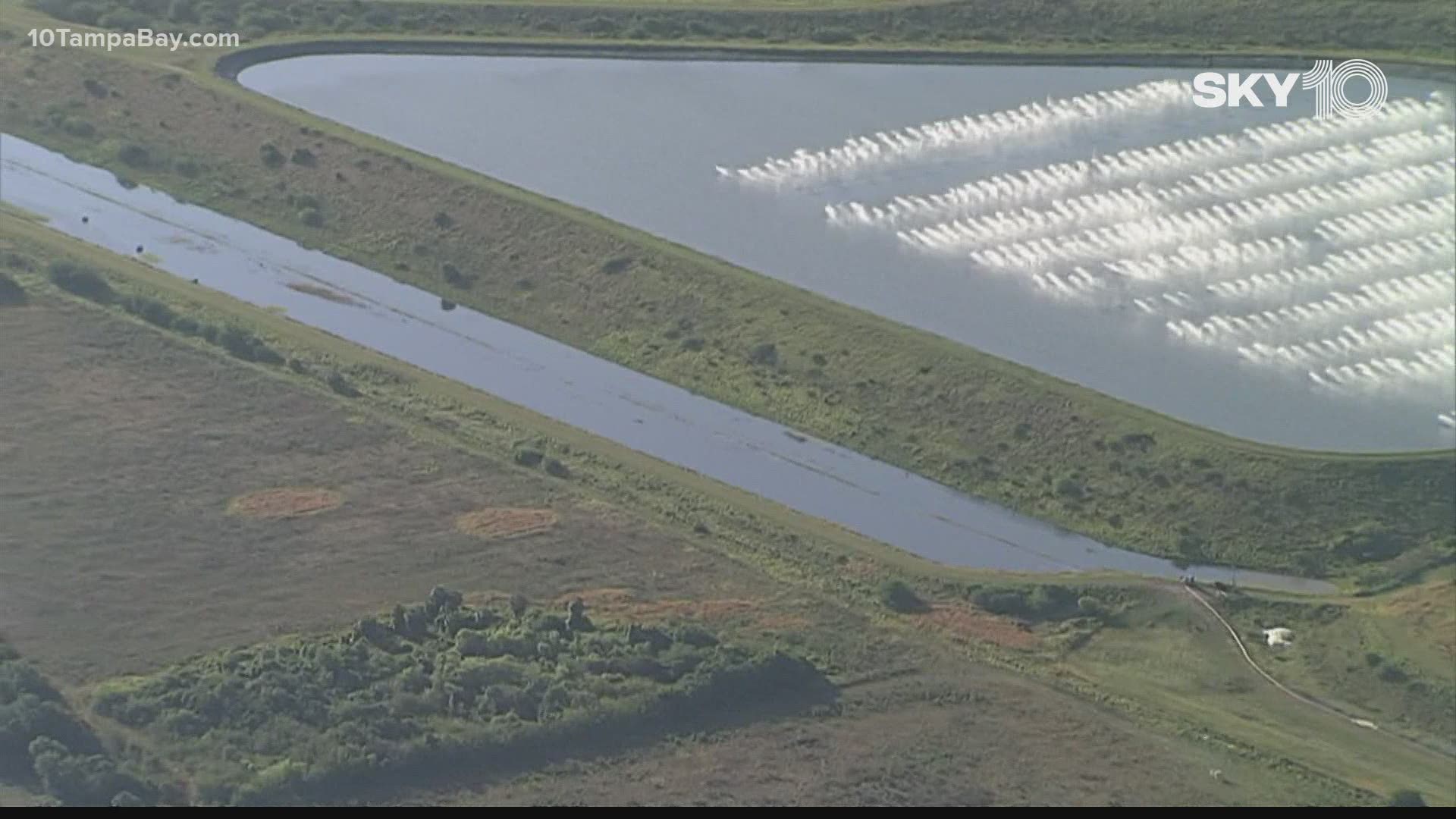 People who live and work in the area are told to get out and stay away.

In addition to a "significant leak" at the bottom of the pool holding millions of gallons of water, several small breaches recently were found. The pool contains a mixture of process water, saltwater from the Port Manatee dredge project, rainfall and stormwater runoff.

Crews are working to relieve stress on the pond by releasing about 22,000 gallons a minute.

10 Tampa Bay is providing continuous coverage this week -- scroll down for the latest updates:

She earlier called upon Gov. Ron DeSantis to convene the Florida Cabinet to address the Piney Point emergency.

7:34 p.m. April 5: Florida Senate President Wilton Simpson, R-Trilby, and Sen. Jim Boyd, R-Bradenton, announced the Senate will consider a budget amendment to fund the cleanup and closure of the Piney Point site, according to a news release.

It will be considered on Wednesday, April 7.

The state estimates it will cost $200 million for the full cleanup and restoration of the state, the release states. Funding may be sourced from money received by the American Rescue Plan, the recent COVID-19 stimulus package.

"This has been a catastrophe waiting to happen for too long. I have committed to Senator Boyd that the Senate will advocate for utilizing federal funding to ensure a full and complete clean up and restoration," Simpson said in a statement. "We don’t want to be talking about this problem again in 5, 10, or 20 years. This is exactly the kind of longstanding infrastructure issue we need to address with the nonrecurring federal funds our state will receive from the American Rescue Plan."

Simpson earlier told 10 Investigates the state would expect the site’s owner HRK Holdings to ultimately reimburse the costs to taxpayers for this "environmental tragedy."

5:08 p.m. April 5: There is only "one identified area where there is concentrated seepage from the east wall" at the Piney Point reservoir site, according to the Florida Department of Environmental Protection.

Officials earlier said they were monitoring a second possible leak; the state announced that is not the case. The Florida DEP also said in its update that the uncontrolled discharge to Piney Point Creek has ceased.

There are 26 pumps deployed to remove 35 million gallons of water per day.

“This contaminated water is being discharged just south of the TECO Power Plant which serves as a major warm water site for manatees,” wrote Clearwater Marine Aquarium Research Institute’s Executive Director James “Buddy” Powell in a statement. “A discharge of this magnitude could have a major impact on the seagrass beds near Piney Point they use to feed. At this point we don’t know what the outcome may be, but it could cause those grasses to die off or have toxicity levels that could potentially be harmful to manatees. The implications of this breach may likely last for decades.”

This year, the state's manatee deaths have tripled the five-year average. The aquarium says the loss of seagrass habitats is a leading factor in the deaths.

Powell warns the situation in Manatee County may be the beginning of an environmental tragedy in Tampa Bay.

3:45 p.m. April 5: The Manatee County Public Safety Department says the county has helped relocate 102 people who were in the evacuation zone and get them into area hotels.

UPDATE: Evacuation orders remain in place and @ManateeGov has now assisted with relocating 102 residents that were in the evacuation zone into local hotels.

3 p.m. April 5: Florida Agriculture Commissioner Nikki Fried says she has called for an emergency meeting of the Florida Cabinet regarding the emergency situation at the former phosphate processing plant.

"This is an all hands on deck situation to protect lives, property & our water resources," she wrote.

The @FlaDemEnvCaucus is right — we need solutions on this crisis. That’s why I’ve called for an emergency meeting of the Florida Cabinet. This is an all hands on deck situation to protect lives, property & our water resources. https://t.co/5VvGJRFSU2

2:50 p.m. April 5: Officials say they are on their way to doubling the removal of wastewater threatening the retention pond's "imminent" collapse.

By the end of the day Monday, around another 20 pumps will be added to the lineup of equipment working to move wastewater from the seepage site, according to the county leaders.

“You can imagine that if we go from 35 million gallons a day to 100 million gallons a day, or more, pulling it out—you can see how within, probably, 48 hours, if all those flows continue, we will be at a situation where we will no longer have that risk of that full breach," County Administrator Dr. Scott Hopes said.

RELATED: Pumps being added to double rate wastewater is flowing out of former phosphate plant and into Tampa Bay

Florida State Senate President Wilton Simpson tells 10 Investigates it could cost the state between $100 million and $200 million to clean up the former Piney Point phosphate processing plant in Manatee County.

The Pasco County Republican said it’s been a “concern” for many years and he’s interested in getting estimates so the state can appropriate funding to “completely stabilize it from now on.”

Simpson told 10 Investigates the state would expect the site’s owner HRK Holdings to ultimately reimburse the costs to taxpayers for this “environmental tragedy.”

He said he anticipates the state might have to sue to recover the cost of cleanup at Piney Point.

“You normally don’t get to a potential catastrophe event without a few missteps,” Simpson said.

#Florida State Sen. President Wilton Simpson tells #10Investigates it could cost the state $100M-$200M to clean up the former #PineyPoint phosphate processing plant in #ManateeCounty. Says he wants estimates so FL can appropriate funding to “completely stabilize it from now on.” pic.twitter.com/5RREvM6a53

12:54 p.m. April 5: Director of Public Safety for Manatee County Jacob Saur says around 2 a.m. an infrared drone "identified a signature that could indicate a second breach" at Piney Point.

The Army Corps of Engineers and new engineers from the DEP are back out at the site and reassessing that determination. The county says it will provide more details once the assessment is complete.

12:18 p.m. April 5: What would a day of rain do to the compromised Piney Point reservoir? Our meteorologists did the math.

The reservoir in question covers an area of 79 acres. When meteorologists talk about 1-inch of rain falling that reflects how it would be recorded in a rain gauge.

RELATED: Here's what another inch of rain could mean for the Piney Point reservoir

10:18 a.m. April 5: Rep. Vern Buchanan is going to share an update on the ongoing efforts to prevent an imminent collapse of the Piney Point retention pond.

We'll hear from officials at 12:30 about the latest on efforts to pump water out of the Piney Point retention pond in order to avoid a catastrophic breach which would flood the area. We know new equipment has been brought in to help speed up the process.https://t.co/TT691Mr6iq

8:34 a.m. April 5: Manatee County's 311 call center has resumed taking calls from those in the evacuation zone.

.@MCGPublicSafety’s 311 call center is open and ready for your #PineyPoint questions! Manatee County residents that are in the evacuation zone can call 311 for assistance! pic.twitter.com/yzIFMlZaU0

6:07 a.m. April 5: 10 Tampa Bay Brightside reporter Thuy Lan Nguyen says with the additional equipment that was delivered to the site, the goal is to have the reservoir drained in four days.

With the additional equipment the goal is to have it drained within 4 days. https://t.co/xZqelZlz7Z

If you have questions, school leaders ask you to call the SDMC Transportation department at 941-782-1287.

You can find a list of impacted routes here.

7:00 p.m. April 4: The Manatee County Sheriff's Office says it is moving 345 inmates from the Manatee County Jail to an "undisclosed location" because of the breach at the Piney Point reservoir. The prison is within the mandatory evacuation zone

The agency said in a "worst-case scenario," i.e. a full uncontrolled breach of the reservoir, about a foot of water would impact the jail.

Calls to our 311 Call Center had slowed to a crawl, so we sent those good folks today at 5 p.m.

Where is the evacuation zone?

The evacuation zone around the breached Piney Point reservoir includes about 316 homes, according to Manatee County leaders.

People who live in Manatee County can visit this link to see if they are affected by the current evacuation zone near the Piney Point reservoir.