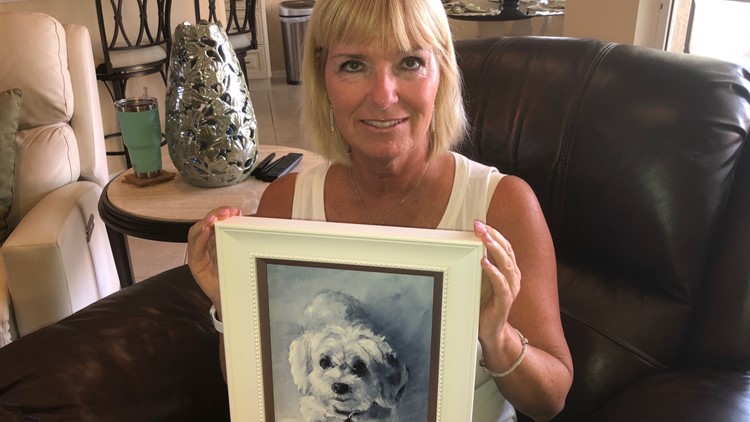 Kelly Bone wants to see more regulation over pet food after her dog, Duncan had to be put down after eating recalled food with toxic levels of Vitamin D.
Author: Liz Crawford
Published: 4:16 PM EDT May 22, 2019
Updated: 4:23 PM EDT May 22, 2019

NORTH PORT, Fla. — The FDA is recalling more cans of dog food over concerns of toxic amounts of Vitamin D.

This is the third recall for Hills Pet Nutrition this year, but it's one of several brands of dog food that have had this same problem, putting pets at risk of getting sick or even death.

Pet owners nationwide have complained their dogs died or got very sick after eating Hill’s food. There are at least three class-action lawsuits.

Kelly Bone, a North Port woman, is part of the suit. Her dog, Duncan, had to be put down in January after he suddenly became very sick.

"He woke up and he was vomiting white foam, vomited for six hours, got lethargic and was yelping."

Duncan was Bone's medical service dog, helping detect when a seizure was coming on. His death was devastating.

Only after Duncan's death did she learn his illness was related to recalled Hill's dog food. Since then, she's been trying to get the word out about dangerous pet food.

However, knowing which food is best for your pet can be tricky.

Susan Thixton is a pet food consumer advocate. She says the issue is bigger than just the latest recall.

Thixton runs the website truthaboutpetfood.com. She's pushing for proactive regulation because she believes the FDA only investigates an issue after the fact, after pets have died after a problem has occurred.

Until then, Thixton tells consumers to look for two words -- "human grade" -- on a pet food label.

"When you see the words human grade on the label, that means that that pet food was manufactured per human food safety standards," said Thixton.

The Association of American Feed Control Officials warns, however, even a food's claim of being human grade may be inadequate.

For example, the group says a product might claim to be human-grade because its ingredients “came from a USDA meat-packing plant.” But materials leaving a USDA meatpacking plant may be either edible or inedible.

The piece of meat that is rejected because it does not meet edible standards and some slaughter byproducts are not human edible, nor can they be implied to be unofficially human-grade.