Light to moderate rain is forecast into Sunday evening. 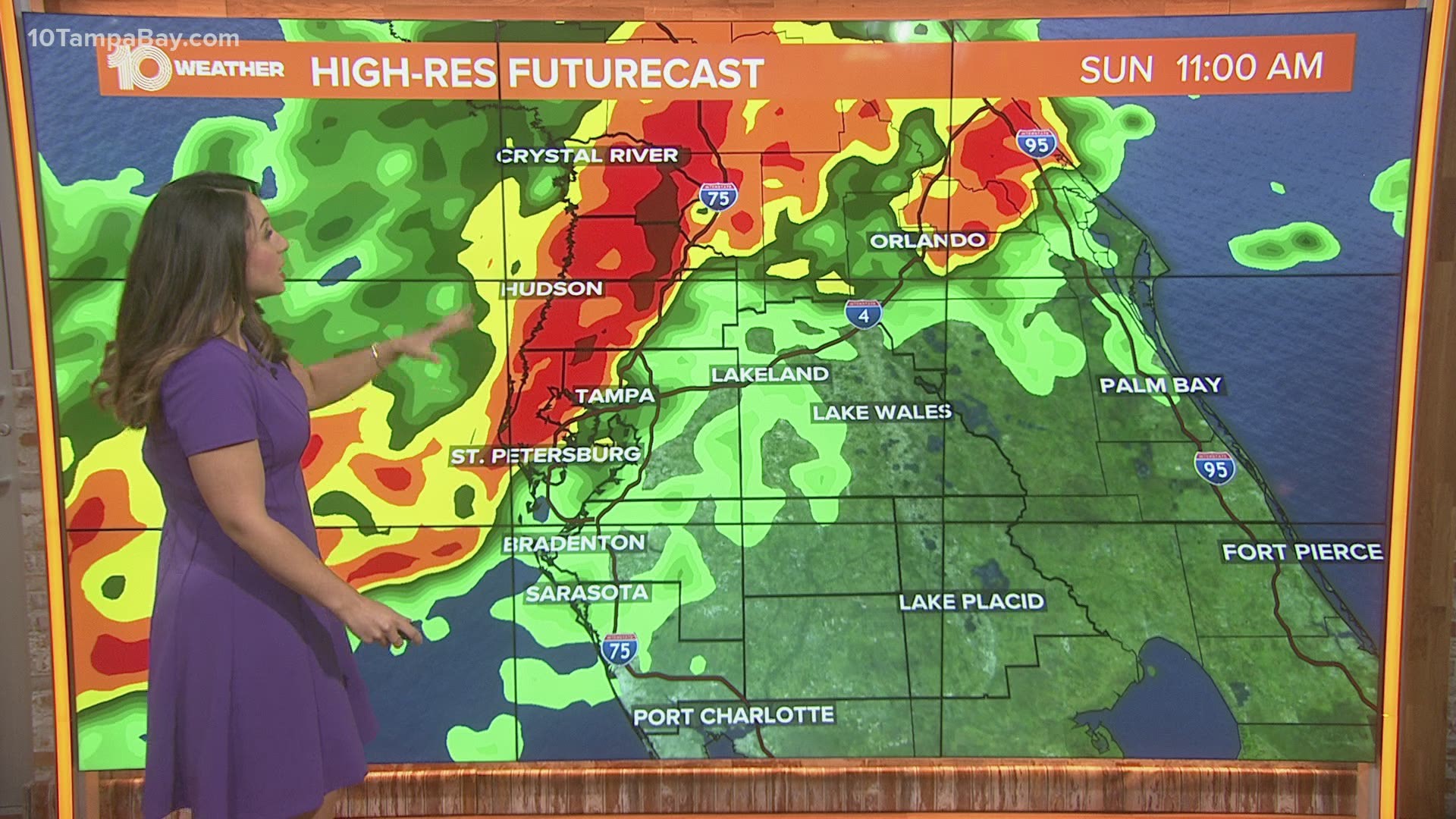 ST. PETERSBURG, Fla. — It was only a matter of time before some great weather gave way to some showers and storms, with a few of them on the bumpier side.

And unfortunately, one person was killed and at least one was injured in the damage brought by the storms that swept through Tampa Bay this weekend.

7:45 p.m.: Tampa International Airport says due to severe weather in the area, it is experiencing widespread delays and cancellations. The airport asks anyone flying today to check their flight status with the airline before going to the airport.

Weather update: Due to the severe weather passing through our state, we are seeing widespread delays and cancellations. If you're flying today, please check your flight status with your airline before coming to the airport.

2:59 p.m.: The severe thunderstorm watch remains in effect for DeSoto, Hardee, Highlands, Manatee and Sarasota counties. It has been canceled elsewhere as the severe weather threat has passed.

Troopers say the teen crashed her car into a power line that had fallen from a downed tree. The car caught fire on its driver's side, prompting the girl to exit out the passenger side of the car.

She stepped onto the downed power line, which electrocuted her, FHP said.

2:39 p.m.: Since most of the Tampa Bay region has been dry lately, the ground has been able to absorb a lot of water. However, some places haven't been able to soak up much of the torrential rainfall.

You'll want to watch out for localized flooding. This view is from Richmond Road between N. and S. Crystal Lake Road in Lakeland. (Photos: Daisey Charlotte) https://t.co/owvRe9Q6gV pic.twitter.com/GAtjB8gHhW

2:15 p.m.: The severe thunderstorm warning for Highlands County has been allowed to expire.

2:07 p.m.: The Lake Wire Inn on N. Florida Avenue in Lakeland was damaged as storms moved through.

1:47 p.m.: A severe thunderstorm warning is in effect until 2:15 for Highlands County. The National Weather Service warns storms could contain 60-mph gusts and quarter-sized hail.

The National Weather Service has issued a Severe Thunderstorm Warning for Highlands until 4/11 2:15PM. Please stay tuned to @10TampaBay for the latest weather updates and on https://t.co/VcC1Rxu8o8. #10weather #tampaflorida #flwx pic.twitter.com/FBsgRfo0op

Due to inclement weather, Busch Gardens will be closing at 3pm today, April 11. We will reopen tomorrow at 10am, as scheduled. pic.twitter.com/w6UMGkNJXJ

1:30 p.m.: The severe thunderstorm warning earlier in effect for Hardee, Hillsborough, Manatee and Polk counties has been allowed to expire.

1:13 p.m.: The severe thunderstorm watch has been canceled for Citrus, Hernando and Pasco counties. The risk of strong to severe storms has lessened.

1:01 p.m.: A severe thunderstorm warning is in effect until 1:30 p.m. for parts of Hardee, Hillsborough, Manatee and Polk counties. The National Weather Service warns of 60-mph winds and penny-sized hail.

12:51 p.m.: A 20-year-old woman is believed to have been electrocuted when she tried to get out of her car after a tree and power lines fell on top of it, authorities said.

It happened on Evenglow Avenue, according to the Hernando County fire chief.

12:44 p.m.: Watch for localized flooding across much of the Bay area. Some ponding was seen in St. Petersburg.

And here’s flooding at the corner of 4th and 22nd. Just be careful driving around. @10TampaBay pic.twitter.com/zcIFf98U1u

12:30 p.m.: The roof over Rum Runners in Palm Harbor was damaged as storms moved through.

The storms that just came through Palm Harbor are no joke! Check out what’s left of the roof over Rum Runners. pic.twitter.com/uSHlqMhV1e

12:30 p.m.: More than 6,800 Duke Energy customers are without power in Pasco and Pinellas counties.

East and Westbound lanes of State Road 52 are blocked at US Highway 41 due to wires down.

12:10 p.m.: More than 5,800 Duke Energy customers are without power, according to the utility's outage map.

11:56 a.m.: Duke Energy reports more than 2,500 customers are without power in Pasco County as the line of strong storms moved through. More than 1,720 people are in the dark in Pinellas County.

11:40 a.m.: The thunderstorm warning has been canceled for Hernando, Hillsborough, Pasco and Pinellas counties. The storms that prompted the warning have weakened.

11:39 a.m.: A burst of high winds and heavy rain came through the Palm Harbor area.

11:09 a.m.: A severe thunderstorm warning is in effect until noon for Hernando, Hillsborough, Pasco and Pinellas counties. The National Weather Service warns 60-mph wind gusts and nickel size hail are possible with these storms.

The Storm Prediction Center issued a severe thunderstorm watch until 4 p.m. for the Tampa Bay region, including Hillsborough, Pasco, Pinellas and Sarasota counties. Those watches were allowed to expire.

Damaging wind gusts to 75 mph, ping-pong-sized hail and a tornado or two are possible with any storm that turns severe. An area of showers and storms became more organized and work its way into the region late Sunday morning into the afternoon hours.

Credit: 10 Tampa Bay
This image times out when to expect thunderstorms in your area Sunday, April 11, across the Tampa Bay region.

Widespread 1-2 inches of rain will be likely, with localized flooding possible, especially in those areas that are slow to dry out during a typical summertime thunderstorm.

A computer model radar image shows a line of strong storms pressing into the area from the Gulf of Mexico as early as 11 a.m.

Credit: 10 Tampa Bay
This is a computer model depiction of the radar at 11 a.m. Sunday, April 11.

Much of central Florida was highlighted with an enhanced risk of severe storms -- a level three out of five scale.

The 10 Tampa Bay weather team will have an eye on the radar all weekend. Keep the 10 Tampa Bay app close by, so you can be alerted to any severe weather watches or warnings this weekend.