Sylvie Marsolais and Alex Mathys are the artists behind many of the custom helmets seen on NHL ice. 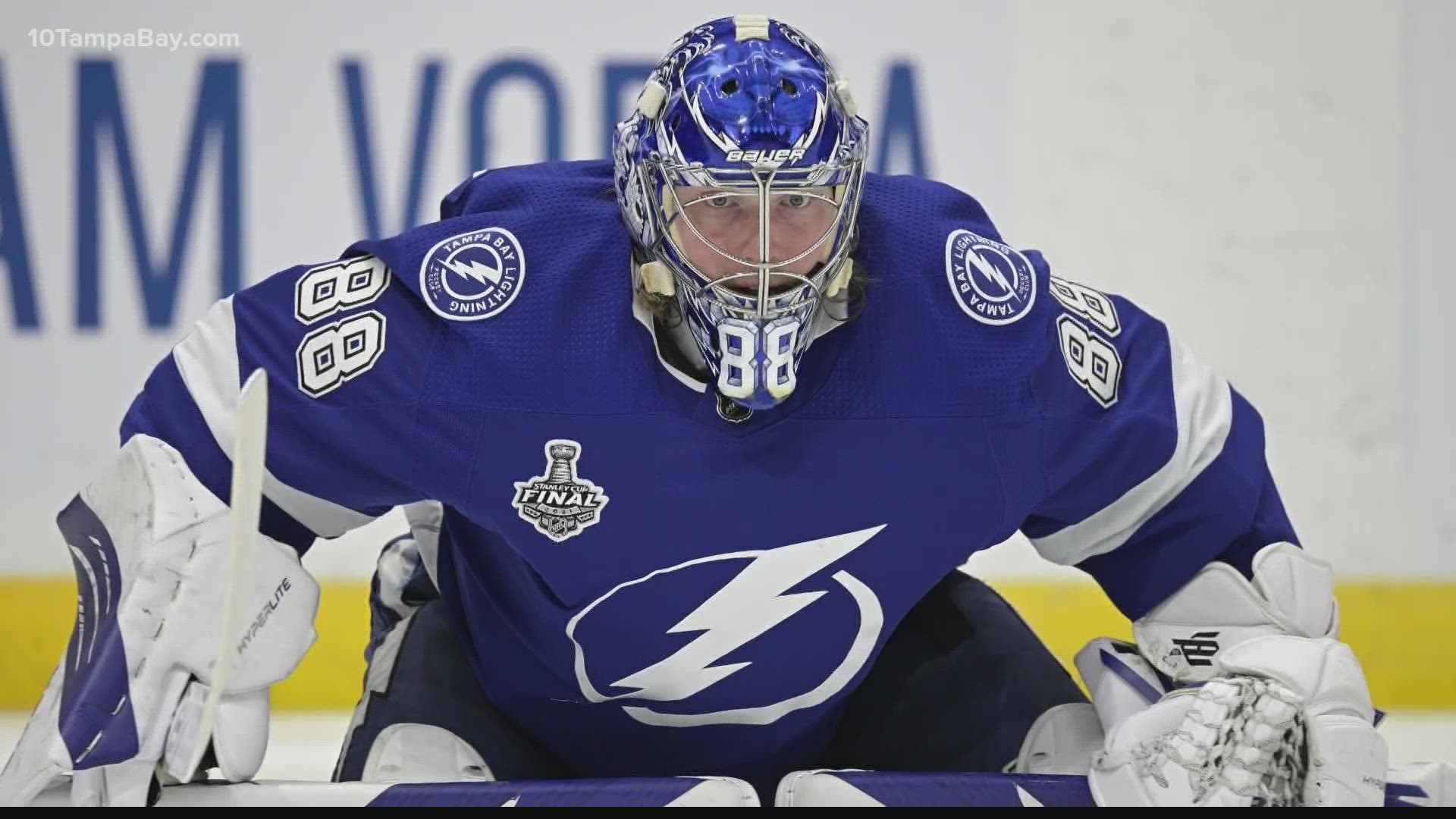 “I started painting in 1999,” said the Canadian artist based near Montreal.

She was working in the pharmaceutical world and did painting on the side. Her boyfriend, Alex Mathys, urged her to pursue art full-time. They bought a house and began Sylabrush.

The business has blossomed. For over two decades, the duo has been busy creating one-of-a-kind pieces of wearable art for the top hockey players on the planet. Their work can be seen on helmets all over the National Hockey League.

“We try not to repeat our designs,” Mathys said. “We are a bit low-profile.”

One of their top clients – and definitely the most recognizable – is reigning Conn Smyth Trophy winner and back-to-back Stanley Cup champion Andrei Vasilevskiy. The Tampa Bay Lightning goaltender has been sporting Sylabrush designs on his helmet since his junior hockey days.

“It’s a crazy feeling,” Marsolais said. “I come up with the fine details. I draw all the details on the mask and Alex finishes the job by putting the clear coat on the artwork.”

Vasilevskiy showed off his helmet the past two postseasons with incredible play. His nickname, “The Big Cat,” given to him by teammates for his quick reflexes, played a prominent role in the design elements of his Sylabrush helmet. The eyes of a menacing cat sit on top of the helmet. They even glow in the dark thanks to special paint used by Marsolais. She and Mathys later incorporated paint that changed colors when reacting to differences in temperature.

“The whole NHL talked about it so it worked out great,” Mathys said.

In 2021, the couple created a new look for Vasy, painting an image of him raising the Stanley Cup on one side of the facemask and included palm trees and lightning bolts, too. They customize each helmet. They even painted Jesus Christ on the backplate of one helmet.

Both Marsolais and Mathys are goalies themselves and play games once per week. Each has been playing the position for years recreationally and met as opponents on the ice. They understand how having a custom-made helmet can help you stand out on the ice. They also feel that a special helmet painted just for you can add some confidence between the pipes.

It’s even cooler to have the world see your work.

Vasilevskiy’s backup is also a Sylabrush client. The Lightning signed goaltender Brian Elliott, 36, to a one-year contract this offseason. The veteran is a two-time all-star. Sylvie shared his newly-painted goalie mask on Instagram. Elliott’s nickname is “The Moose,” so, naturally, the helmet’s backplate includes an outline of the animal wearing sunglasses. The helmet also features lightning bolts and palm trees.

Vasilevskiy and Elliott are not the only netminders with a custom lid from Sylabrush. Around the league, about a dozen goalies wear paint jobs by Sylabrush. The artists even do work for many minor league players.

“They are all our favorite,” Mathys said.

He and Marsolais were split in their decision to cheer for the Lightning and Vasilevskiy during the 2021 Stanley Cup Finals games in Montreal. Tampa Bay beat the home Canadiens in Game 3 but lost in Game 4. Family and friends, all Habs fans, knew the artists had done a lot of work for Vasilevskiy and wanted him to do well.

“You’re painting for the wrong team,” they jeered.

“We’re Canadians but we’re not full Canadiens fans,” Mathys joked. “We have a special spot for Vasy. He’s on a mission 365 days per year. He’s something else. He’s a machine. He never stops. That’s why he’s so good.”

Ultimately, Vasilevskiy and the Bolts got their second straight title. Vasilevskiy allowed just eight Habs goals in five Finals games and shut out Montreal in the clinching contest. The Lightning will open the 2021-2022 season on Oct. 12 at home against the Pittsburgh Penguins.

The Bolts’ star goalie will be sporting a new mask that night.

“He’s already got the new one for this year,” Marsolais said.

What’s the price tag for a custom Sylabursh helmet? The artists charge $600 for simple designs and over $1,500 for complex ones. It takes from 30-80 hours to complete those complex designs, which can take up to two weeks to complete. The business has been featured globally by multiple hockey media outlets.

To see a gallery of their work, check out the Sylabrush website or the company’s Instagram page.