Do US Capitol Police have jurisdiction to open field office in Tampa?

Critics are calling on the governor to stop it from happening, but a constitutional law expert says the USCP has the authority. 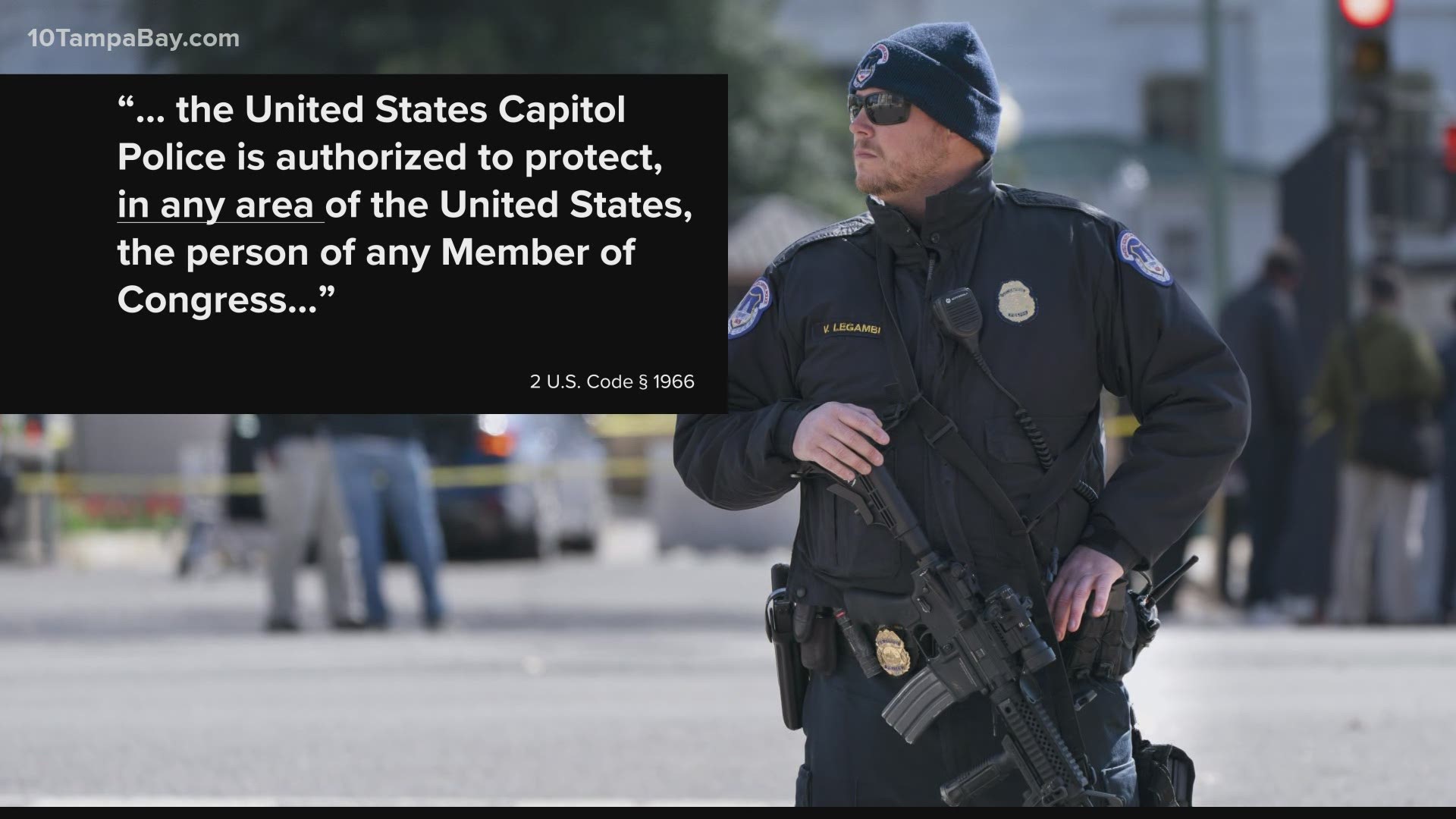 TAMPA, Fla. — A week after U.S. Capitol Police announced plans to open a Tampa field office, the Hillsborough GOP on Wednesday sent a letter to Gov. Ron DeSantis demanding he stops the field office from opening, arguing the agency has no jurisdiction.

Additionally, more than 2,000 people have signed a petition similarly calling on the governor and other state leaders to “protect the constitutional rights of Floridians from federal overreach.”

Florida leads the nation in arrests connected to the Jan. 6 attack on the Capitol.

The decision to establish field offices in Tampa and San Francisco, the agency said last week, is in part to allow for a regional approach in investigating threats made against members of Congress. California and Florida are where “the majority” of threats currently are originating, a spokesperson said.

While the USCP’s primary jurisdiction is within buildings and grounds of the United States Capitol Complex, they are also charged with protecting members of Congress throughout the entire United States and territories, and they have that authority to protect “in any area” of the country, according to 2 U.S. Code § 1966.

“Absolutely this is within the constitutional power of the federal government to create these field offices to ensure they can protect the members when they're completing their mission—their duties—representing their constituents whether in their home district or in Washington,” said Michael McDaniel, a constitutional law professor at the Western Michigan University Cooley Law School.

“The state’s powers over law enforcement are very broad but within certain carve outs, and this is one of them, the federal government has plenary and primary jurisdiction,” McDaniel said.

Asked to comment on the calls for him to intervene, a spokesperson for the governor said in an email, “Congressional Democrats should focus more on the dangerous ‘defund the police’ movement taking hold of the left and less on political schemes,” and went on to ask, “when have the FBI or Florida law enforcement ever fallen short when Capitol Police asked for help.”

Critics of the proposal, like retired police captain and John Jay College of Criminal Justice professor Dorothy Moses Schulz said the USCP lacks the resources, knowledge and transparency to successfully expand in this way.

“What role will they play that isn’t already being played,” she said, referring to the FBI and U.S. Secret Service. “And the fact their budget, personnel allocations and nothing about them is subject to FOIA makes this all the more disconcerting.”

Republican Florida Sen. Rick Scott was among those who praised the Capitol Police's decision.

“Senator Rick Scott has been clear that what happened on January 6 was absolutely horrible and disgusting, and that the individuals responsible for attacking the Capitol should be held fully accountable. He will continue to support efforts of Capitol Police and law enforcement," the senator's office said in a statement to 10 Tampa Bay.

Since the attack on Jan. 6, more than 500 defendants face charges, including several from the Tampa Bay area.

Earlier this year, a Clearwater man was accused of assaulting officers at the Capitol with both a fire extinguisher and wooden plank. A woman in Lakeland faces several charges after being accused of participating in the mob of people who stormed the building.

Most notably, though, was the arrest of Adam Johnson after he was identified in a viral photo carrying House Speaker Nancy Pelosi's lectern.

RELATED: Polk County EMT among 3 Floridians arrested in connection to US Capitol insurrection

RELATED: New video released as 5 people from the Tampa Bay area are linked to Capitol riot