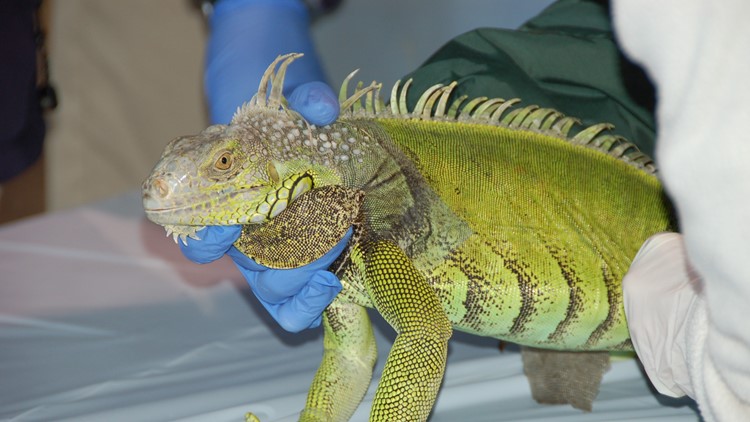 Photo by: My FWCmedia
Iguana

FLORIDA, USA — The Florida Fish and Wildlife Commission is telling Florida homeowners they have permission to kill green iguanas found on their property.

The Washington Post reports the reptiles have been spotted in Florida since the 1960s and have exploded in population in recent years. The Post adds climate change may be to blame for their thriving population, which some scientists say has caused warmer, more hospitable climates for them to expand.

On the other hand, iguanas have been known to "freeze" in places like Florida during colder-than-usual temperatures.

RELATED: It's so cold in Florida, iguanas are falling from trees

Green iguanas are not protected in Florida except by the anti-cruelty law. The reptiles can be killed year-round without a permit on 22 public lands in South Florida.

Commercial licenses must be purchased to sell or import the species to the state.

Some people enjoy the taste of iguanas, and the Washington Post also reports some Caribbean countries call them the "chicken of the trees." WSB radio warns people looking to hunt iguanas for food, however, should be careful since some iguanas may be poisonous.

Male iguanas can grow to more than five feet in length and can weigh as many as 17 pounds, according to FWC. Female iguanas reach a similar length but normally do not weigh more than seven pounds.

Iguanas can live up to 10 years, naturally, and 19 years in captivity. The reptiles can live in a variety of environments and are considered excellent swimmers, submerging themselves for up to four hours at a time.

The reptiles originated from Central America, parts of South America, and some eastern Caribbean islands.