President Joe Biden has made it a priority to administer 100 million vaccines in about three months. Florida recently crossed the 2-million mark. 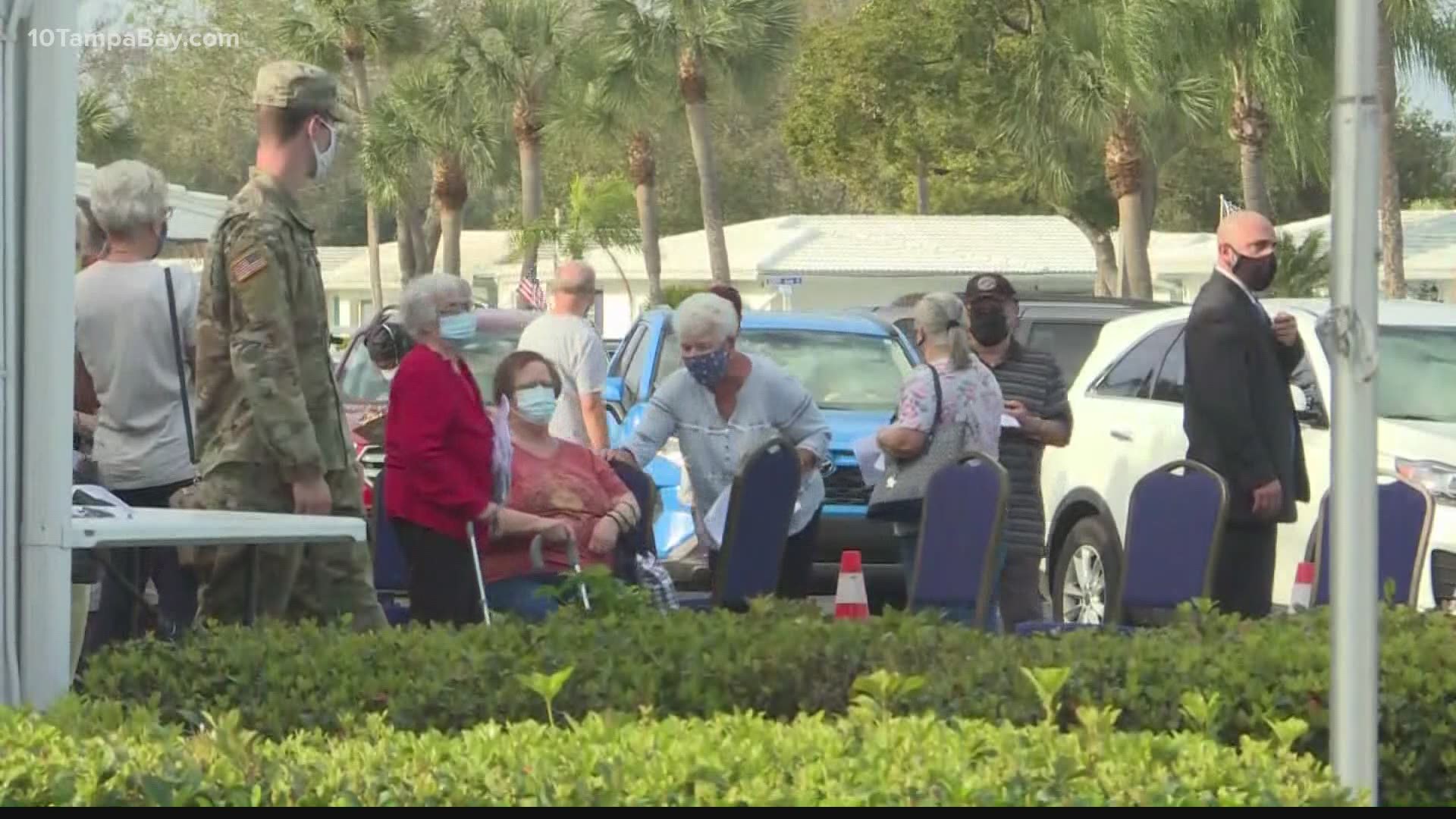 President Joe Biden is ambitious about getting Americans vaccinated. Over the weekend, the president visited a Pfizer facility and said he believes we will surpass his 100-million doses in 100 days goal.

The news comes as we hit day 30 of that promise. Nationwide on day 10, we were at 13.6 million vaccinated under the Biden administration. That number more than doubled at day 20 and then on day 30, we are at 43.7 million shots in arms. Remember these are the doses administered since Biden's promise. They do not count the total number of vaccines administered before he took office.

RELATED: US on verge of coronavirus vaccine breakthrough as manufacturing ramps up

"Not very satisfying:" Those are the words of 69-year-old Carlo Brauer when he described the process of getting vaccinated. Like most of the 4.2 million seniors in the state of Florida, Carlo had some trouble booking his COVID vaccination appointment.

“I tried to log in. After two hours, a message came out saying all appointments have been scheduled,” Carlo explained.

After trying over and over for an appointment, he was finally booked for a dose.

Hall says the additional doses have allowed them to add more vaccination sites across the county.

And it’s not just Pinellas County seeing more sites open. The state has added pop up sites across the state, focusing on communities where the percentage of seniors vaccinated is low.

“Statewide we are at 42 percent, and in Pinellas County, just 35 percent. So that's why we’re allocating more here,” DeSantis said in a news conference.

In Florida, nearly 3,000,000 residents have been vaccinated. That is 14 percent of the population. But even so, we have many more residents waiting on a vaccine, but officials continue to say the supply isn’t there.

Remember, that Largo site could vaccinate up to 2,000 people a day.

“At this point, we're using the vaccines that we have or making appointments, again for what's on hand. So, it has the capability of going up to that,” Hall said. The site is not yet vaccinating 2,000 people a day.

Some of Florida’s supply was delayed because of winter storms, pushing back some appointments for those already scheduled.

"I am from the era of the polio vaccine, and that worked. That truly was a blessing. So, I'm kind of of the mindset that vaccinations do more good than harm,” Carlo said.

Carlo says he hopes the supply keeps coming in so everyone can be excited to go on with life like he is.

The chief executive at the Pfizer manufacturing plant Biden visited promised 200,000,000 million vaccines by May, 2 months ahead of schedule.

Biden also says he believes there will be enough vaccine for all Americans by the end of July and he hopes the nation will be “approaching normalcy by the end of this year.”

Overall, 43,206,190 vaccinations have been administered nationwide.

Since President Biden's executive order went into place 25,659,816 doses have been given. If we stay at this rate, the president will make good on the goal of 100-million vaccines in 100 days.

Here in Florida, state leaders have criticized the supply coming in from the federal government saying it's not enough.

10 Investigates Jennifer Titus went to the state capital for a behind the scenes look at vaccine distribution from the Florida Division of Emergency Management.

When the State's Emergency Operation Center is activated at level one that usually means a hurricane is brewing close by but for the last year, the focus has been on the pandemic and vaccine distribution.

"We've been here for 330 plus days at a level one," Jared Moskowitz, the Director of Emergency Management shared.

Credit: 10 Tampa Bay
Doses distributed and administered to the state of Florida. Data for Feb. 6 is missing on this chart.

Two hundred and fifty people work at the EOC and use data to make distribution decisions.

"So, you know, where we have the 65 and older population in each county, we take the doses we have. And it's just simple math. And that's how it gets allocated," Moskowitz explained.

Titus asked Moskowitz about the difference in doses allocated using Pasco County's vaccines as an example. Turns out distribution is also reliant on sites opening and shared the greater Tampa Bay area county is slated to see 9,000 doses a week.

"No. So, that was early on before sites were open. Now once sites get open, it's all equal," Moskowitz said. "At first, it was short, because they didn't have the ability to get the doses out. So, we didn't want to bury doses in freezers."

"You know, on distribution, they get a huge 'F'. There's just no better way to say it," he added.

Bottom line, Moskowitz says, there was no distribution plan.

"None whatsoever. We have 4.3 million seniors in the state of Florida. We told them that the vaccine would be available to them and it's not. And so that's because the federal government did not give us the information to tell us what the production schedule was going to be," the Director of Emergency Management said.

He also discussed the state's distribution being criticized by some county health departments.

Since vaccine rollout began in Florida, 1,965,590 people have been inoculated. The state has also seen 1.5 million vaccines since President Biden promised 100-million vaccines in 100 days.

At 20 days in President Biden has met 25 percent of his goal as of the more than 43,000 overall vaccinations, 24,871,243 of them occurred under his administration

"We are at the will of these companies that produce the vaccine, and we're just not getting enough of it. And again, I know the administration is doing everything they can to fix those issues. But poor planning from the federal government for the last six months is what we are all now feeling," Moskowitz said

One-hundred million vaccines in 100 days. That's the promise President Joe Biden made when it comes to vaccinating Americans against COVID-19.

And after some pressure, Biden raised that number to 150 million. Biden then dropped the number back to 100 million doses. Sunday, Jan. 31, marked Day 10 of the promise.

Every tenth day of the 100-day promise, 10 Investigates will be updating the numbers. Where do we stand as a country and as a state?

When it comes to the country, we have vaccinated 31,123,299 people. Now, that is overall, since the first vaccine was given back in December.

Where are we for the state of Florida? As of Monday, the Centers for Disease Control and Prevention is reporting more than 2 million people have been vaccinated in the state. Some say that's not enough.

Credit: Centers for Disease Control and Prevention
The number of COVID-19 vaccine doses distributed and administered in Florida.

Larry Hollis, a 67-year-old veteran, is one of the 4.2 million seniors in the state of Florida who are eligible to get a vaccine. Hollis reached out to 10 Investigates after he had issues signing up for a vaccine.

"I tried to sign up. And I've tried, I think four times, to no avail," Hollis said.

But as of Monday, only 1,202,026 people have received a vaccine. That's less than a quarter of the senior population.

Gov. Ron DeSantis blames that on the federal government, saying the state is not getting enough vaccinations.

"Call your congressman, your U.S. Senators and tell them we need more vaccines," said DeSantis in a news conference.

So, 10 Investigates did just that. We emailed and called both Sens. Marco Rubio and Rick Scott's offices, asking for just 5 minutes for an interview over a week's time.

Rubio's office told us they wouldn't be able to make anything work. Scott agreed to speak with us.

"It's important that we get vaccines out to the states as we can add responsibility to states to get this out to individuals as quickly as they can," Scott said. "And of course, get the most to the most vulnerable. First, to get that as quickly as you can. So, we're working with the HHS, we're working with the manufacturers, I've talked to them about the importance of getting this out because we can, and we're going to do everything we can up here."

The states receiving the most doses so far are California, Texas, Florida and New York state.

Vaccines aren't just going to the states. More than 3.1 million doses are going to eight territories including Guam, the Republic of Palau and the Federated States of Micronesia and to federal entities, including the Bureau of Prisons, Department of Defense, Indian Health Services and Veterans Services.

It hasn't been easy getting information from the Biden administration about vaccine distribution, Scott claims.

For Hollis, like the 3 million other seniors still waiting for a shot, he hopes the supply will increase soon and he'll be moved to the column on the list showing he received his first dose.

"Because until we're vaccinated, we're just gonna be in this holding pattern. And I like everybody else. I'm tired of this. Let's move on," Hollis said.

And this week, Florida will see an increase in weekly doses from the federal government. In the past, we were receiving about 250,000 doses. This week we'll get 306,000 doses.

To put that into perspective, though, that number doesn't even equal the number of seniors in all of Pinellas County, which has more than 420,000 seniors.

The governor would like to see 5,000 doses a week. Of course, we'll be keeping track. You can keep track of the CDC data here: https://covid.cdc.gov/covid-data-tracker/#vaccinations