Johnson & Johnson COVID vaccine less effective than others, but not where it matters most

When it comes to preventing hospitalizations and deaths, doctors say the data shows Johnson & Johnson is just as effective as Pfizer, Moderna. 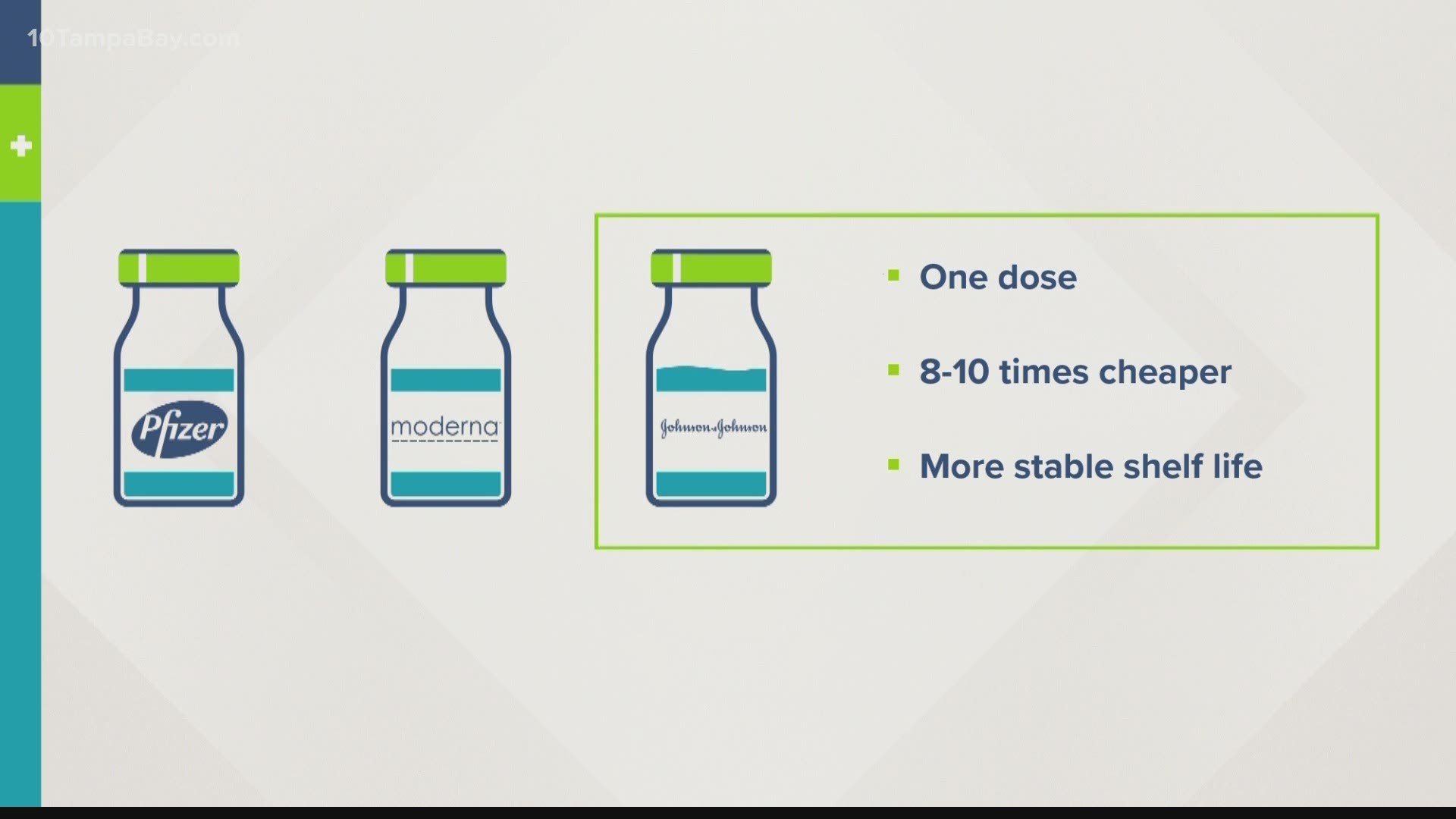 ST. PETERSBURG, Fla. — A third COVID-19 vaccine could be in the mix by this weekend.

An FDA vaccine advisory board made up of outside experts will meet on Friday to discuss whether to recommend Johnson & Johnson’s vaccine for emergency use.

It would be the first single-dose shot available in the U.S.

The Johnson & Johnson vaccine appears to be 66 percent effective at preventing moderate to severe cases of COVID-19, according to data from clinical trials, compared to about 95 percent for Moderna and Pfizer.

But University of South Florida virologist Dr. Michael Teng says that doesn’t take into consideration the most important measure.

“That's what we're really trying to do – keep people out of the hospital, keep them from dying."

It’s a sentiment also shared by Gov. Ron DeSantis during a press conference in Brooksville on Wednesday. DeSantis, who has talked up the one-dose shot for months, suggested the vaccine gets a bad wrap.

“The way it gets portrayed sometimes I don’t think is fair,” he said, unprompted. “There’s a lot to recommend from Johnson & Johnson.”

Details on when, where and how many doses will arrive in Florida, if approved, were still being worked out, DeSantis told reporters.

Johnson & Johnson’s lower efficacy rate can also be traced back to where and when it was tested in clinical trials, Teng said.

Unlike Pfizer and Moderna, clinical trials for Johnson & Johnson’s vaccine were more recent. They were also in places like Latin America and South Africa where more contagious and potentially deadly variants of the virus have been spreading for longer.

“So they’re seeing a different coronavirus in their trials,” he said. “The virus that was around last summer when Moderna and Pfizer were conducting trials is not exactly the same as the virus Johnson & Johnson is conducting their trials with.”

Teng says a one-dose shot has the potential to drastically change vaccine distribution.

“This is going to be great for our more sparsely populated areas that don't have easy access,” he said. “If approved everywhere, this vaccine is going to make a huge difference globally."

If cleared by the FDA advisory board on Friday, the FDA commissioner would likely sign off on that recommendation this weekend. Then a CDC advisory council would decide which age groups should get it and when by Monday.

Johnson & Johnson says it will have 3-4 million doses ready to ship "immediately."

The White House's COVID-19 Response Coordinator says they will waste no time in getting those out and they expect millions more to follow.