The governor has received criticism over opening a COVID-19 vaccination site in the wealthy area of Lakewood Ranch in Manatee County. 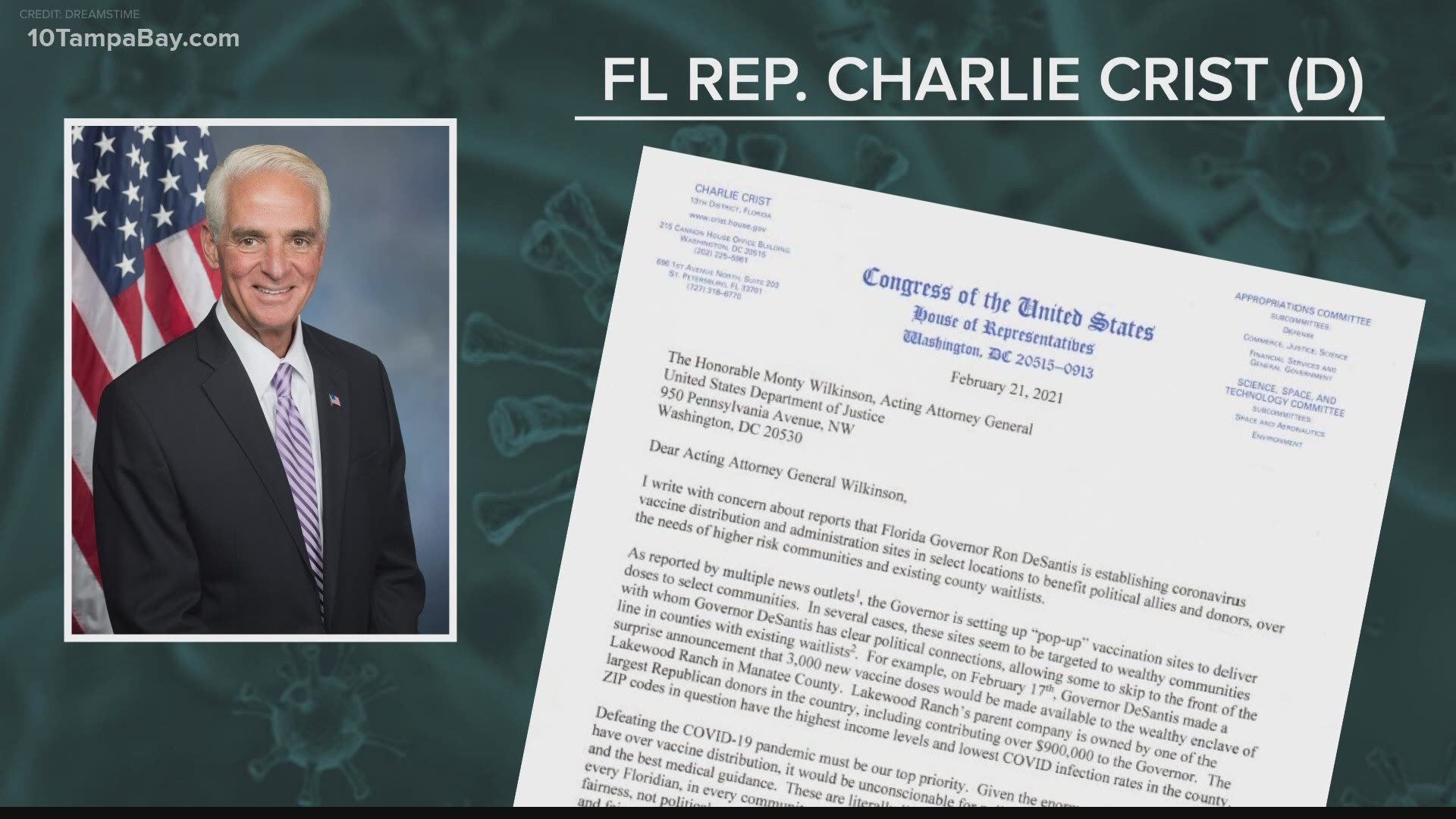 In the letter, Crist says some pop-up COVID-19 vaccination sites DeSantis announced "seem to be targeted to wealthy communities with whom Governor DeSantis has clear political connections, allowing some to skip to the front of the line in counties with existing waitlists."

Crist requests the DOJ to "determine if the Governor's blatantly political vaccine distribution decisions, which do not seem to be in the public's best interest, violate federal law and merit a full federal investigation."

The governor faced scrutiny this past week in Manatee County at the Lakewood Ranch pop-up site. This, after Commissioner Vanessa Baugh told commissioners she chose to give the 3,000 appointments to those who live in Lakewood Ranch's neighboring two zip codes, 34202 and 34211. This choice varies from the way the county randomizes vaccine allocation through a lottery system.

Emails obtained by 10 Tampa Bay also show Commissioner Vanessa Baugh asked for her name and four others to be added to the vaccination list.

When asked about Baugh's "VIP vaccine list" at a press conference in Pinellas Park on Feb. 18, DeSantis said, "you should ask them."

On Feb. 17, he responded to concerns over vaccine distribution in Lakewood Ranch by asking “Would they rather us send it to other counties?"

RELATED: 'You should ask them': Gov. DeSantis on Manatee vaccine 'VIP list'

“It wasn’t a choice about zip codes. It was a choice about where’s a high concentration of seniors, where you could have communities provide the ability for them to go on. It wasn’t choosing one zip code or another," DeSantis said at the time before listing locations other pod sites have popped up.

He continued Thursday saying that the pop-up vaccination sites were filled with additional doses not included in the vaccines already allotted to each county.

Rep. Crist says in his letter Lakewood Ranch's parent company is owned "by one of the largest Republican donors in the country, including contributing over $900,000" to DeSantis.

"Given the enormous latitude Governors have over vaccine distribution, it would be unconscionable for political corruption to trump both fairness and the best medical guidance. These are literally life and death situations," Crist's letter states in part.

According to the latest report on the Department of Health's website, more than 1.7 million white people in Florida have been vaccinated. That compares to just more than 919,192 people that make up several demographic backgrounds.

“Time and time again, Governor DeSantis has proven he is not up to the task of leading our state out of this pandemic as he continues to play politics with the health and well-being of vulnerable Floridians,” said Rep. Crist in a statement.

So far, over 30,000 Floridians have died and at least 1.8 million more have gotten sick, with minority communities and seniors hit the hardest. Instead of prioritizing people most at risk, the Governor has chosen – during the worst pandemic in a century – to help out his friends and donors. That is why I’m calling on the Department of Justice to investigate.”

Why is Governor DeSantis playing politics with vaccine distribution? His political allies & donors should not get to skip the line. Calling for full DOJ investigation. pic.twitter.com/OTjpkdD1o4