Leading up to the governor's visit, Mayor Rick Kriseman has continually pushed for more help with red tide cleanup efforts from the state. 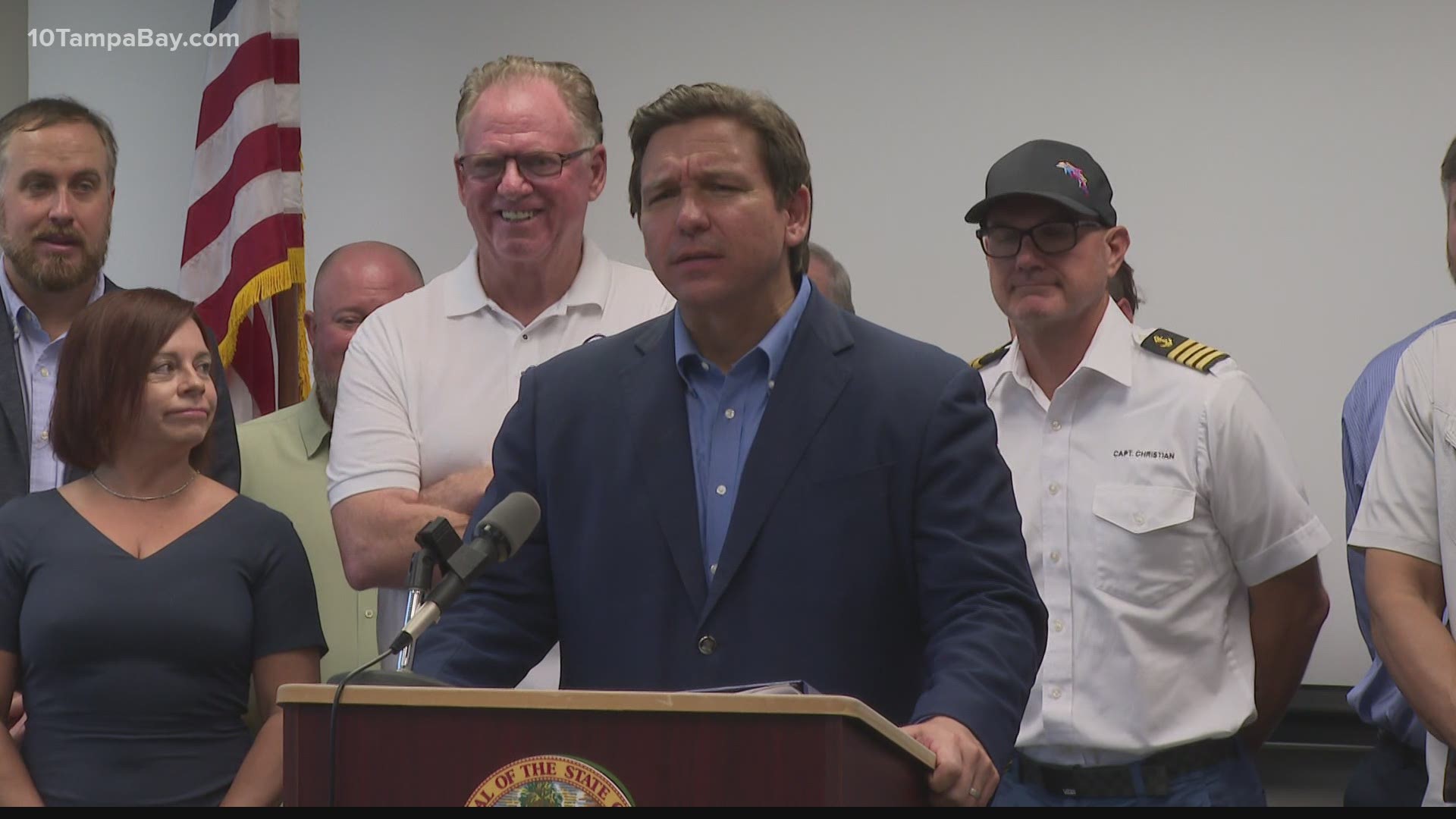 While speaking with local environmental leaders and business owners at the Fish and Wildlife Research Institute, the governor touted the state's efforts in addressing the harmful algal bloom.

This comes amidst claims from Mayor Rick Kriseman that DeSantis is politicizing the issue, rather than using the state's resources to handle it.

Kriseman has repeatedly called on DeSantis for help with cleanup and mitigation efforts, to which the governor has responded that the state has ample resources and funding to help in any way it can.

On Wednesday, Kriseman tweeted that the "politicization of the governor's response to red tide is truly sickening."

The politicization of the governor's response to red tide is truly sickening. My team and I are focused on fixing the mess that was sent our way. When crisis comes, partisanship must go. We should always come together in times like this. https://t.co/zOd4SH5s3n

When asked about the mayor's tweet, DeSantis said, "How did I politicize red tide? This is something I tackled from day one in office. It’s never been political.”

"They just wanted to do it for a political talking point," the governor continued. "That was made a political issue by them, not me."

Kriseman has previously said he doesn't care how the city of St. Petersburg receives assistance, as long as assistance comes. He has specifically asked the state for an emergency order and additional resources like boats.

"Due to this proactive approach, DEP has already been able to commit $2.1M to clean-up costs incurred for both Pinellas County and the city of St. Petersburg in response to this red tide bloom," said DeSantis.

The city of St. Pete said it has not directly seen any of the state's red tide funding. Requests for reimbursement are currently being made.

Pinellas County said it initially requested funding from the state for both the county and the city of St. Pete. Attorneys for the County and City are working on an interlocal agreement that will provide the mechanism for reimbursement.

The county this week provided St. Petersburg the executed FDEP grant agreement for $902,000, covering expenses from June 11 to July 10. The city is now expected to prepare the documentation required for reimbursement so it can be submitted to the state as soon as possible.

In a similar exchange last week, Kriseman tweeted, "Ignore the politics from the governor's office" while he continued to push for help cleaning up the tons of dead marine life washing ashore.

In response to the mayor's plea for help, a spokesperson for DeSantis said Kriseman is "either unaware of what is actually going on in his own backyard or is deliberately lying and using red tide as an attempt to score cheap political points."

During Wednesday's press conference, the governor doubled down on the idea that a state of emergency is not necessary as Florida already has programs and resources in place to address red tide.

DeSantis detailed the efforts he made to address red tide when he took office in 2019, following the months-long outbreak that lingered in the Tampa Bay area in 2018.

He mentioned that he reactivated the red tide task force, helped to establish a center for red tide within the FWC, and dedicated specific funds to respond to the algae bloom.

"We’re using the funds just as they're intended to be used," DeSantis said while ensuring that the state was taking a proactive approach in handling the issue.

“We’re committed to being in this fight. Not just as we see through this current episode in Tampa Bay, but understanding that this is an issue for the west coast of Florida that periodically occurs, the governor said.