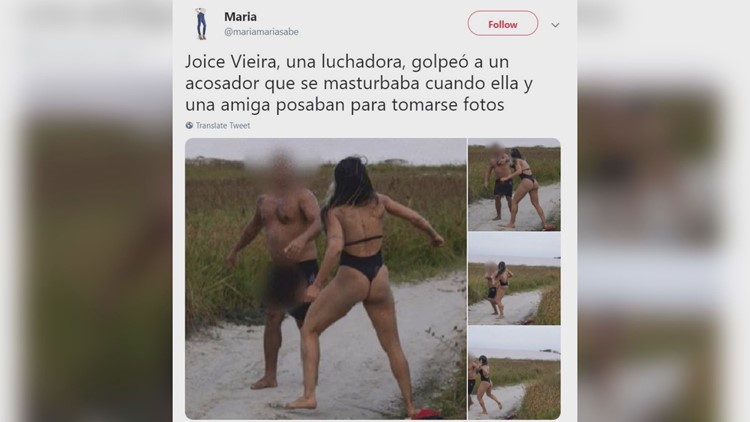 Photo by: @mariamariasabe, Twitter
Brazilian mixed martial artist Joyce Vieira was with a friend and they decided to approach the shirtless man to ask him to stop.

Brazilian mixed martial artist Joyce Vieira, 27, was posing for the swimsuit shoot earlier this month on Praia do Braga beach in Rio de Janeiro, 10Daily.com reports. Viera reportedly noticed the man was watching her while touching himself.

"When I looked over there he had his shorts down and was standing on a path where people pass all the time, including children," she told Brazilian paper Folha de São Paulo. "He was visibly erect, making sounds and moaning.”

Vieira was with a friend, and they decided to approach the shirtless man to ask him to stop, according to reports. Photos of the incident appear to show Vieira punching and kicking the man after he reportedly refused to stop.

According to Brazilian media, the case is ongoing. It will be taken to the Public Ministry.