The parade was full of Cup-hoisting, Jet Ski riding and beer chugging. 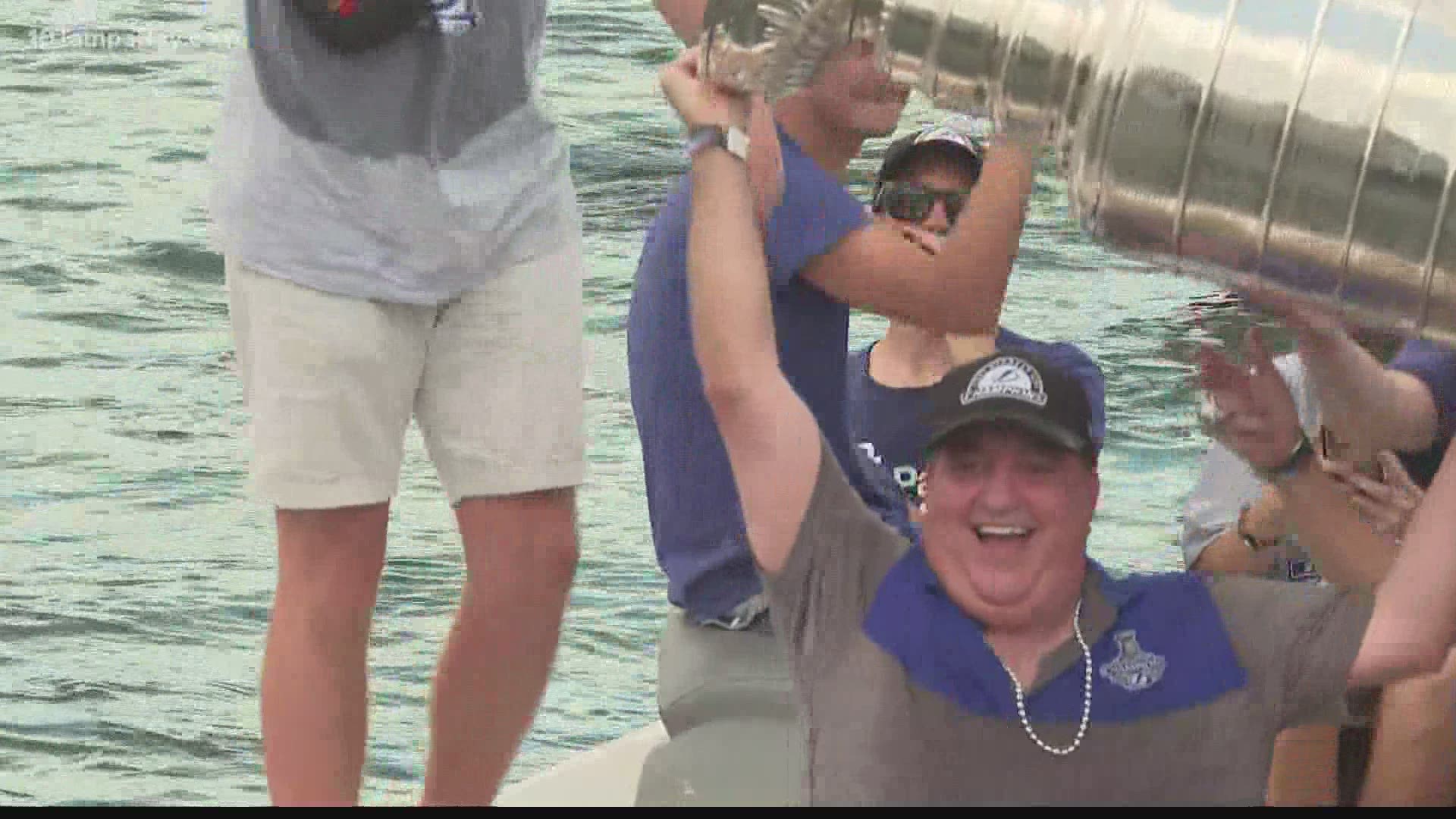 Fans got a glimpse of their favorite players as they sailed down the Hillsborough River with the Stanley Cup in hand. The famous hockey trophy also got a ride on Alex Killorn's Jet Ski.

There was plenty of Cup-hoisting, beer-chugging and celebrating to go around. Thankfully no one attempted what would have been a heart-stopping Stanley Cup toss.

A big celebration had been planned at Julian B. Lane Riverfront Park but was, sadly, canceled because of the weather.

What do you say "Champa Bay?" Same time next year?

If you couldn't be there for all the action or are looking for a reason to once again revel in all the celebrations, we've got you covered in the thread below!

Sad news for Lightning fans. A spokesperson for the City of Tampa says there are currently no plans to reschedule the rained-out celebration at Julian B. Lane Riverfront Park.

"It was a great celebration—joyous, unscripted, spontaneous, and a thrill for tens of thousands of fans, many of whom happened to get wet," Tampa Director of Communications Adam Smith wrote in an email. "The Lightning brought the thunder again, and it was a blast. No plans to reschedule at this time."

The Tampa Bay Lightning post-parade celebration at Julian B. Lane Riverfront Park has been canceled due to storms.

Today’s celebration event at Julian B. Lane has been cancelled due to weather conditions.

Lightning players are making their way outside after a rain delay at Julian B. Lane Riverfront Park. The stage was temporary covered up, as fans got drenched waiting for the post-parade celebration.

Rain or shine, the slightly-soaked @TBLightning players are bringing out the @StanleyCup! #GoBolts https://t.co/peuG3BqcZb pic.twitter.com/XEww1uWByH

"Back-to-boat" has a nice ring to it.

The boys are back to boat! pic.twitter.com/jlrDpwsvN1

My goodness. That water is *not* what you want. pic.twitter.com/C5dSsQbEja

This is the definition of "Champa Bay" if we've ever seen one.

PAT "STANLEY CUP HAT TRICK" MAROON IS IN THE HOUSE!

So, same time next year?

Fans at Julian B. Lane Riverfront Park are ready to keep the party going.

LET'S GOOOOOOOOOOOOOO ⚡ Fans have been waiting for hours for the #StanleyCup and the #Bolts to make their way to Julian B. Lane Waterfront Park. It won't be long! #GoBolts https://t.co/fIrrQU2NFx pic.twitter.com/1et73PMOID

More photos are beginning to roll in, and the Jet Skis are back! Tampa Bay Lightning left wing Alex Killorn could be seen riding one while holding the Stanley Cup as teammate Nikita Kucherov gestured to the crowd.

Coach Coop out here just soaking. it. all. in. #GoBolts @TBLightning @10TampaBay pic.twitter.com/1LMrX7ESTo

Yanni Gourde with another beer-crushing moment.

Just a couple of champs enjoying being back-to-back champs!

The 2021 Stanley Cup victory parade has just a little bit of everything.

Just a little game of catch with a #StanleyCup champ 🏆🏈

Bolts fans are loud and proud here at the Stanley Cup victory parade.

Crowd here at Julian B. Lane chants for Andrei Vasilevskiy as the boys pass through! The crowd in here near the stage is watching them on TV’s and cheering. Just waiting for them to be driven in here. That’s when the fun will start 😬⚡️ #GoBolts @10TampaBay pic.twitter.com/NPkjUWubAr

Brayden Point is a man of the people on and off the ice. He's inviting fans on his boat for photos while the parade is on hold.

Brayden Point, man of the people.

He was walking around matching fans sip for sip, then invites some on his boat for a picture #GoBolts pic.twitter.com/Vr0cKpOrJv

The Tampa Bay Lightning's Stanley Cup boat parade must temporarily halt because the mayor's boat came across an anchored vessel that wasn't supposed to be there along the parade route, according to 10 Tampa Bay's Beau Zimmer. The parade will be paused until that anchored boat can be moved.

Andrei Vasilevskiy: A man of many talents.

Andrei Vasilevskiy puts the Conn Smythe Trophy ON HIS HEAD and “Vasy Vasy!” Chants break out in the crowd #GoBolts pic.twitter.com/MKN1l4lAe8

It was only a matter of time before the Stanley Cup made its way onto a Jet Ski.

Gangs all here. Take a look at the Lombardi, Conn Smythe AND the  Stanley Cup on the parade route.

THAT'S A LOTTA HARDWARE! Check out the Lombardi, Conn Smythe AND the #StanleyCup all on board there. #GoBolts #ChampaBay @10TampaBay pic.twitter.com/6ILoBqmf9g

ThunderBug and City of Tampa Mayor Jane Castor are getting fans hyped up along the parade route.

Someone get the Stanley Cup a life vest.

Spotted: The Stanley Cup is heading your way Bolts fans!

HOIST THE CUP 🏆! The #StanleyCup has officially been spotted on the parade route #GoBolts https://t.co/xi6z97MI2i pic.twitter.com/yMCMV5kkNG

Julian B. Lane Riverfront Park is quiet...for now. Here's a look at where Bolts fans will continue to celebrate with the Lightning post-parade.

THIS is the place to be for @TBLightning Championship Boat Parade! #GoBolts set to take the stage here around 2PM after flowing down the Hillsborough River with the #StanleyCup. We’ve got your coverage from Julian B. Lane Park on @10TampaBay all day! pic.twitter.com/4faexBVTIA

It's almost time! Live coverage gets underway on 10 Tampa Bay at 11 a.m.

Almost time ‼️ Tune in at 11 AM for special, live coverage of the #GoBolts championship boat parade on @10TampaBay 🏆🍾 @CarolinaLwtsp https://t.co/8mSyRKawfR pic.twitter.com/3vkhuGRoQD