BRADENTON, Fla. — One of the cooperating witnesses in a massive college admissions scam worked as the director of college entrance exam prep at IMG Academy in Bradenton.

Riddle faces two charges, according to the documents:

The school and sports academy had removed Riddell’s profile from its the website by Tuesday afternoon. Riddell, who lives in Palmetto, started working at IMG in 2006.

"Today we were made aware of the charges against Mark Riddell. Riddell has been suspended indefinitely as we investigate this matter. "

The court documents accuse Riddell of getting paid by admissions consultant Rick Singer who was collecting money from the wealthy parents, including Hollywood actresses Lori Loughlin and Felicity Huffman.

The documents accuse Singer of using his charitable organization, The Key Worldwide Foundation, to pay Riddell. It claims the men cheated on “college entrance exams on behalf of the children of Singer’s clients” and “to enrich Riddell, Singer and their co-conspirators personally.”

Furthermore, the documents claim in exchange for Singer and Riddell’s assistance with cheating, parents would make a supposed charitable donation to the Key Worldwide Foundation.

Singer supposedly used the “donations” to bribe two SAT and ACT administrators, who administered the exams at a public high school in Houston.

The documents also accuse the men of committing mail fraud between 2011 and February 2019. CBS News reports parents charged in the alleged scheme are accused of paying Singer $25 million between that timespan.

Boston U.S. Attorney Andrew Lelling said at a news conference Tuesday that Singer used some of the money to bribe test administrators and college coaches.

"Singer worked with the parents to fabricate impressive athletic profiles for their kids," Lelling said, adding that in some cases students faces were placed, using the image editing program Photoshop, onto the bodies of athletes.

Riddell is an alumnus of IMG Academy. He also played tennis at Harvard University.

He released the below statement Wednesday via his attorney.

"I want to communicate to everyone that I am profoundly sorry for the damage I have done and grief I have caused those as a result of my needless actions. I understand how my actions contributed to a loss of trust in the college admissions process.

I assume full responsibility for what I have done. I do, however, want to clarify an assertion that has arisen in the media coverage. I absolutely, unequivocally never bribed anyone, nor has the Information filed by the U.S. Attorney's Office charged me with any form of bribery.

I will always regret the choices I made, but I also believe that the more than one thousand students I legitimately counseled, inspired, and helped reach their goals in my career will paint a more complete picture of the person I truly am.

I will not be making any further public comments on the matter." 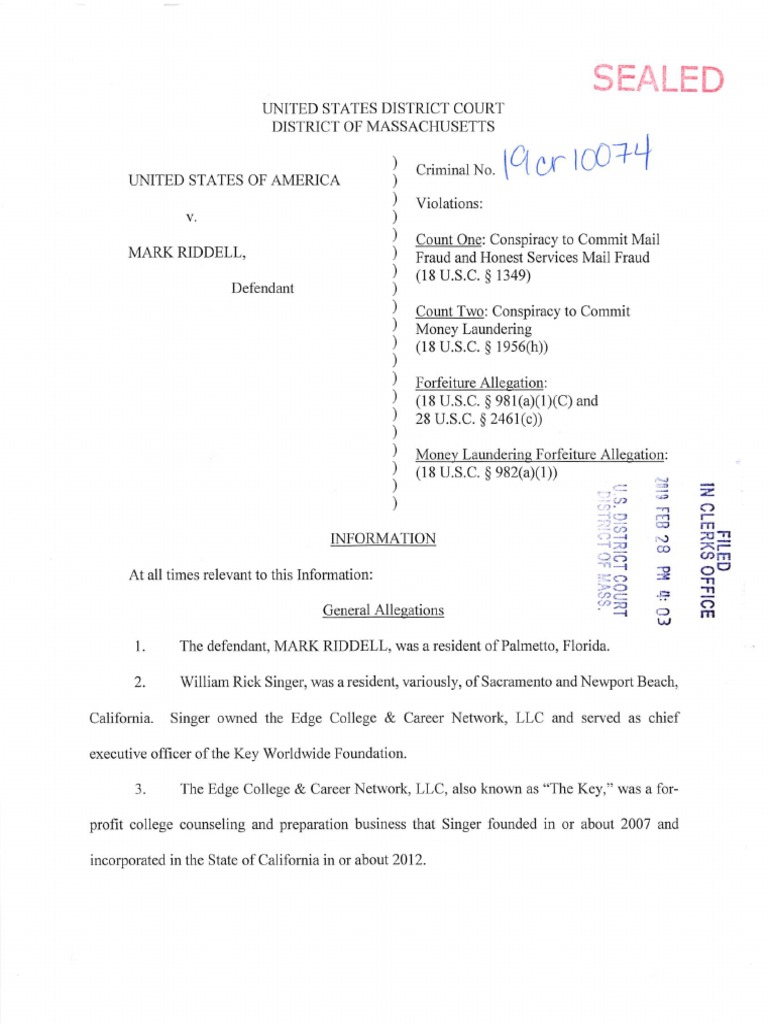