Drejka is charged with manslaughter in the July 2018 shooting death of McGlockton. 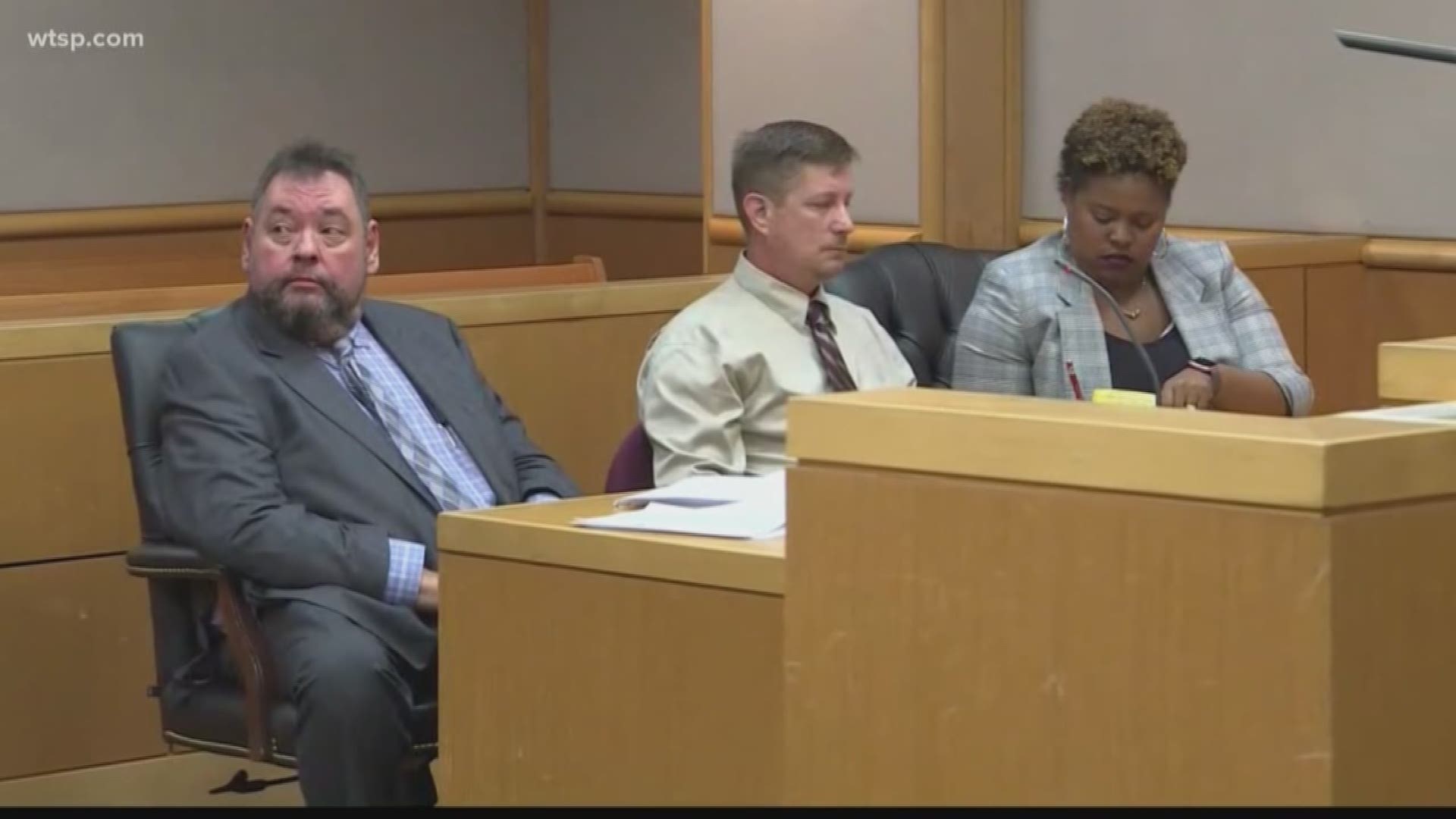 Here's a look at the events that have unfolded since the July 19, 2018, shooting outside the Circle A Food Store in Clearwater:

Aug. 9, 2019: The state will be able to show part of the surveillance video of the deadly shooting in slow motion.

Prosecutors agreed not to show any footage of Markeis McGlockton falling in front of his 5-year-old son, who was in the car at the time, with or near the father while McGlockton was dying. In return, the defense agreed to admit McGlockton was not armed.

July 19, 2019: This date marked one year since the deadly shooting. Markeis McGlockton’s family members have done what they can to keep his memory and the case in the public eye.

June 27, 2019: The Florida Supreme Court revoked the law license of Lysa Clifton, who is accused of soliciting alleged Clearwater parking lot shooter Drejka while he was sitting in jail.

Clifton agreed to give up her license to practice law, and her membership in the Florida Bar was nullified.

June 7, 2019: Lawyers for Michael Drejka said they would not use a "stand your ground" immunity argument to try to avoid prosecution.

April 26, 2019: A Pinellas County judge ruled a previous confrontation involving Michael Drejka and another man over the same disabled parking space outside the same food store will be admissible in trial.

March 12, 2019: John Trevena, the lawyer who represents Michael Drejka, was arrested. Trevena was charged with domestic violence. An arrest affidavit claimed Trevena hit his ex-wife, shoved her to the ground and kicked her after showing up at her apartment. That charge was later dropped.

Feb. 22, 2019: Lab results showed Markeis McGlockton had the drug ecstasy in his bloodstream when he was shot and killed by Michael Drejka.

Lawyers for Drejka plan to make that part of their defense.

Jan. 11, 2019: Michael Drejka’s lawyers argued there are too many addresses he has been ordered to stay away from since bonding out of jail.

A judge ruled Drejka must stay away from locations that would put him near McGlockton’s girlfriend Britany Jacobs and her children.

Jan. 4, 2019: A Pinellas County Sheriff’s Office detective was fired after law enforcement said he showed up to a homicide investigation under the influence of alcohol.

Investigators said George D. Moffett Jr. was off duty when he responded to a deadly shooting on Gandy Boulevard in St. Petersburg in an unmarked Pinellas County Sheriff’s Office vehicle.

According to a court document, he was the lead detective on the Michael Drejka case.

Jacobs has since given to birth to the child, her and McGlockton’s fourth.

Credit: AP
In an Aug. 7, 2018 photo, Michael McGlockton holds a photo of his son, Markeis McGlockton, in Clearwater, Fla. Markeis was shot and killed on July 19 in Clearwater, Florida during an argument over a parking spot. The shooter, Michael Drejka, said he was defending himself and is using Florida's controversial 'Stand Your Ground' defense. (AP Photo/Tamara Lush)

Nov. 6, 2018: Lysa Clifton was charged with driving under the influence.

Oct. 19, 2018: A judge granted a motion to remove Lysa Clifton as one of Michael Drejka’s lawyers.

According to the affidavit from Oct. 15, Drejka said he received "an unsolicited personal visit by Clifton" after his first appearance in court on Aug. 14.

Sept. 26, 2018: Video from the Pinellas County Sheriff's Office of the interrogation of Michael Drejka shows him talking about the deadly shooting of Markeis McGlockton.

In the recording, Drejka says McGlockton was stepping toward him when he fired, a statement that is contradicted by autopsy and investigative documents.

Sept. 25, 2018: Documents support prosecutors' previous claim that Markeis McGlockton was backing up and turning away from Michael Drejka when Drejka shot him outside a Clearwater convenience store.

Sept. 18, 2018: The wife of Michael Drejka spoke publicly for the first time since her husband was charged with manslaughter.

In an exclusive interview with 10News, Drejka's wife expressed her love for her husband and a feeling of helplessness as she grapples with the reality her husband is behind bars.

Aug. 31, 2018: The man at the center of the Clearwater shooting that sparked a nationwide debate over Florida’s "stand your ground" law spoke with 10News.

From jail, Michael Drejka sat down with 10News for his first interview.

The attorneys for Drejka had filed a motion to reduce his bond. However, Judge Joseph Bulone ruled $100,000 was a reasonable bond considering the facts of the case.

Bulone made a point to tell those in the court that it was not a "stand your ground" hearing.

Aug. 17, 2018: Michael Drejka formally pleaded not guilty to manslaughter, according to court records.

Records show Drejka has waived his right to an arraignment hearing and entered a not guilty plea.

Aug. 16, 2018: The Florida Bar opened a solicitation investigation into Lysa Clifton, who is one of three lawyers representing Michael Drejka.

Public logs showed Clifton went to visit Drejka at the Pinellas County Jail, where she said he agreed to have her represent him.

Bar rules prohibit lawyers from soliciting clients with whom they do not have prior relationships -- at least unless certain conditions are met.

“At this point, I have not received a complaint," Clifton said in response. "But, just like alleged criminals have attorneys, attorneys have attorneys. So, I’m not afraid of any accusations to come because I didn’t violate any ethical rules.”

A judge appointed a public defender to represent Drejka.

The judge ordered that, if Drejka decided to bond out of jail, he cannot have any contact with McGlockton's family.

Aug. 13, 2018: The State Attorney has finished a review of the deadly Clearwater shooting and decided to charge Michael Drejka with manslaughter.

Detectives arrested Drejka on a warrant on Monday, Aug. 13.

Drejka was booked in the Pinellas County jail, and his bond was set at $100,000.

"I support the State Attorney's decision and will have no further comment as the case continues to work its way through the criminal justice system," Pinellas County Sheriff Bob Gualtieri said in a statement.

Aug. 8, 2018: Faith leaders and Markeis McGlockton’s family rallied in Tallahassee and said their reason was that the "stand your ground" law had a negative impact on the poor and on minorities.

Several state leaders – including Tallahassee Mayor Andrew Gillum – marched to Gov. Rick Scott’s Office at the Capitol and attempted to get an audience with the governor or senior administration officials. Scott was in Colombia.

Aug. 7, 2018: Democratic state lawmakers asked the 160 members of the Florida Legislature to say whether they wanted to hold a special session to consider amending or repealing the state's "stand your ground" law.

A "yes" vote by three-fifths of the Legislature would have resulted in a special session. Republicans rejected a similar request in 2013.

Pinellas County commissioners unanimously passed a resolution asking state lawmakers to clarify and even consider changing parts of the "stand your ground" law.

"It's just a bunch of rhetoric," Gualtieri said. "I didn't pay much attention to it to tell you the truth. I wasn't there, and don't really care what Al Sharpton has to say. Go back to New York. Mind your own business."

Sharpton said to Pinellas County Sheriff Bob Gualtieri, "Lock up shooter Michael Drejka or give up your badge."

Watch: Rev. Al Sharpton during Clearwater rally: Lock up Michael Drejka or give up your badge

Aug. 1, 2018: The Pinellas-Pasco State Attorney's Office received the case of a fatal shooting outside a Clearwater convenience store that has become the center of controversy over Florida's "stand your ground" law.

He said the sheriff's office was in the process of turning the case over to the state attorney's office.

Two groups set to join Gualtieri, the NAACP and the Upper Pinellas County Ministerial Alliance, bowed out of the news conference at the last minute.

Watch: Click or tap here to watch the July 31 news conference in its entirety

July 30, 2018: Jesse Jackson’s Rainbow PUSH Coalition vowed to take its fight to the polls, vowing to only vote for candidates in November planning to repeal Florida’s controversial law.

While he wouldn't go so far to say he'd pursue a full repeal of the controversial law, Diamond said he would like to undo changes made to the law in 2017.

Two former state representatives from the Tampa Bay area said they didn't imagine the law would be a consideration of law enforcement in the deadly Clearwater shooting when they voted for it in 2005.

July 24, 2018: The family of Markeis McGlockton said he was a good son and father.

July 23, 2018: Michael Drejka is also apparently no stranger to confrontation at the same Circle A convenience store, according to the store's owner.

The owner said Drejka and McGlockton were regular customers.

July 22, 2018: Protesters gathered at the Circle A store on Sunset Point in Clearwater to express their frustration about how the Pinellas County Sheriff’s Office handled the case.

July 20, 2018: The Pinellas County Sheriff's Office released video of the argument between Michael Drejka and Markeis McGlockton over a parking spot outside of a Clearwater Circle A convenience store.

It shows within four seconds of being pushed to the ground, Drejka fires.