SunPass Saga may be on verge of getting worse again

Hundreds of thousands of Toll-by-Plate customers are about to get four months of bills, all at once. That is, once the state can figure out how to send the bills out without errors. 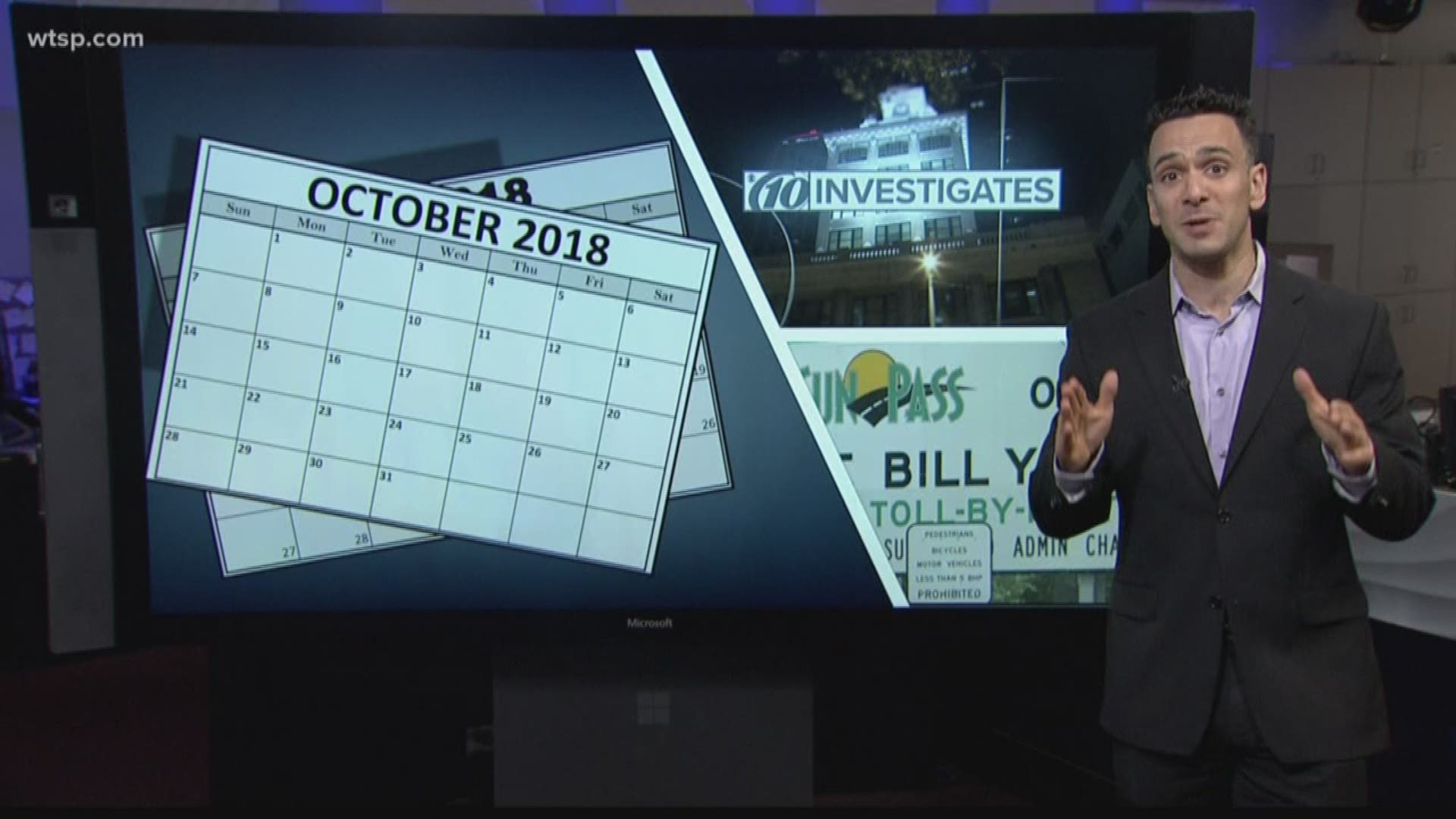 TAMPA BAY, Florida - The customer service nightmares that have plagued SunPass customers for four months may be on the verge of worsening, as the state nears its October projection for the mailing of Toll-by-Plate invoices, held up due to computer errors since the start of June.

However, on Friday, an attorney for the Florida Department of Transportation (FDOT) indicated to 10Investigates the state still may not be able to correctly process those invoices, hinting at further possible delays.

When hundreds of thousands of customers finally receive the invoices in the mail, it is likely many will flood SunPass' customer service lines and inboxes with questions about large backlogs of charges, just as hundreds of thousands of other customers did this summer, responding to unexpectedly large bills after the SunPass system collapsed after what was supposed to be just a six-day upgrade at the start of June.

FDOT downplayed problems with its Toll-by-Plate (TBP) process to 10Investigates last month, saying the bills would go out in October. Customers would have six months to pay off the four months of charges, with no late fees.

RELATED: Where does all that SunPass money really go?

But late Friday, FDOT acknowledged - 120 days after the SunPass disruptions began - TBP bills may not yet be ready to go out to customers, as planned.

FDOT has refused to field 10Investigates' questions by phone, choosing to respond to questions almost exclusively with once-weekly, end-of-day emails on Fridays. FDOT Secretary Mike Dew said his department was committed to more transparency, but the department has not provided answers to many of 10Investigates' direct questions recently.

The state's top inspector general is now investigating FDOT and its SunPass contractor.

Concern: Floridians had no idea how bad the SunPass failures were until 10Investigates broke the news on June 19 that the state was unable to process tens of millions of toll transactions. It was another week before the state even acknowledged problems, and it spent months downplaying the severity of the system disruption. No public notice was given when dozens of drivers’ personal data were accidentally compromised in July, and no public notice was given when FDOT learned some toll transactions were not appearing accurately on customers' accounts.

Response: After two months of 10Investigates stories and sometimes-deceptive press releases, FDOT got more forthcoming with public records and SunPass-related information. The public still has no explanation -- outside of 10Investigates' reporting -- of how 6 million customers were inconvenienced so badly, but the agency promises answers once it is able to conduct an investigation. FDOT has refused to field 10Investigates' recent questions by phone, choosing to respond to questions almost exclusively with once-weekly, end-of-day emails on Fridays.

Concern: It hasn’t just been one computer issue - it’s been virtually every computer issue: customers couldn't access receipts to get work reimbursements; accounts were compromised; transaction logs have widespread inaccuracies; drivers got hit with large and unpredictable charges when tolls finally were processed; and the delays mean account errors are very difficult to spot and correct.

Response: FDOT, its partners and its vendors have been working around-the-clock to fix the computer issues, and they announced there will be no fines or penalties on customers during the ongoing disruption. The toll backlog was finally cleared in mid-August for many SunPass users, but it still isn't clear when Toll-By-Plate customers will get their invoices. When they do, they will have six months to pay off the charges without penalty. The state rolled out a plan to reimburse customers for bank overdraft fees. But account errors – which may be frequent – are the responsibility of the customer to identify and report before refunds are issued.

Concern: Some customers had to wait nearly five hours to speak to representatives and SunPass' promise to respond to emails within two days is going unfulfilled.

Response: An FDOT spokesperson says extra staff members have been dedicated to customer service but has been unable to provide specifics over the course of the last three months. In July, an agency spokesperson touted website improvements and Conduent's reduction of call center wait times; but in August, the website continued to crash, and call center wait times exploded as more drivers discovered unexpected and some inexplicable charges on their accounts. The current hold times are back under an hour, but tens of thousands of service requests remain outstanding.

Response: The mid-August announcement that Florida's inspector general would investigate came only after 75 days and four 10Investigates interviews with Scott. Payments were halted to Conduent in late June, but 10Investigates revealed the company is still getting paid on other contracts. The state announced an $800,000 fine to Conduent, and it said the company will pay for customers' overdraft reimbursements as well. However, no fines or penalties have been mentioned for corporation Atkins, the general contractor responsible for oversight on the project, or HNTB, the corporation that oversaw the awarding of the contract to embattled Conduent in the first place. It appears no FDOT employees have yet been disciplined, even though the agency's management may not have followed proper protocol in approving the testing before SunPass went live with the new system in June. It could be months before the governor's inspector general reveals any findings.

Concern: It appears the state was unable to match all of the transactions to vehicle owners, delaying the posting of charges. Viewers are also reporting errors in plate identification, landing other drivers' tolls on their accounts.

Response: An FDOT spokesperson has been saying for months all transactions will eventually be billed to customers "once quality assurance processes are completed." The state finally acknowledged in mid-August invoices likely won't go out until October, but even that goal may not be met.