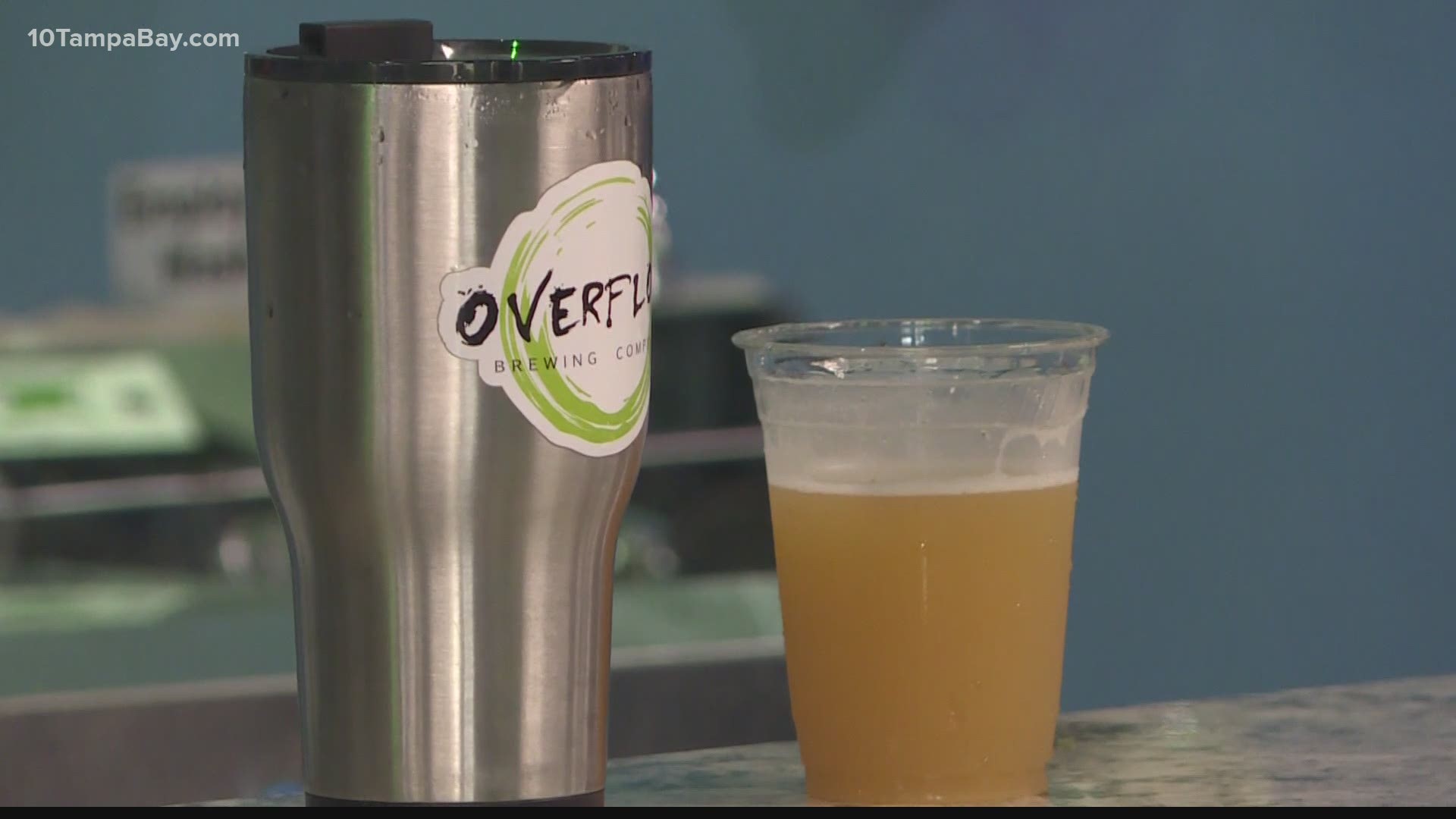 FLORIDA, USA — After having to close their doors due to the coronavirus pandemic, bar owners will be able to reopen at 50 percent capacity starting Monday, according to DBPR Secretary Halsey Beshears.

Beshears tweeted the announcement Thursday night saying, "We are rescinding amended EO 20-09 from DBPR as of Monday. Starting Monday, all bars will be reopened at 50 percent occupancy." According to a release, the adjustment came at the direction of Gov. Ron DeSantis.

We are rescinding amended EO 20-09 from DBPR as of Monday. Starting Monday, all bars will be reopened at 50% occupancy. pic.twitter.com/YqQR2MkJpR

80 days later, breweries like Overflow Brewing Company in St. Pete are preparing to welcome customers back inside again. The announcement was good news for the small shop which has been open to customers for just three weeks since March 17.

Managing member Ryan Sarno was in the process of getting approved for a food license when the decision to reopen was announced.

“Well, we were just literally about to have our inspection for our 509 license on Friday morning, and Thursday at 6:30 at night they make the announcement that we can open tomorrow," explained Sarno. "I'm lucky enough I was able to knock off the inspection and recover a little bit of money."

Monday will mark the first day bars are allowed to reopen, at a limited capacity, since June 26 when executive order 2020-09 suspended the sale of alcohol for consumption on-site at state bars in response to "an increase in the number of individuals testing positive for COVID-19."

At the time, the move to shut down drinking at bars came after more than 100 complaints had already come into the state about some businesses not following social distancing guidelines

Executive order 2020-10 states that bars and other alcoholic beverage vendors can resume sales of alcoholic beverages for consumption on the premises given their operations comply with Phase 2 of the "Safe. Smart. Step-by-Step Plan" for the state's recovery.

So what does this look like? Locations will be able to operate 50 percent of their facility's indoor capacity, allow bar service to seated customers and permit outdoor seating and service with appropriate social distancing.

"In meetings with hundreds of owners of bars and breweries across the state, I’ve heard their stories of struggle, and I’ve observed their serious commitment to making health and safety a continuing priority in their businesses,” Beshears said.

“It’s time that we take this step, and it’s vital that we start moving forward with this sector of our hospitality industry who have endured one of the toughest paths for sustaining a business during this pandemic.”

And it's a step brewers have been asking for, for some time now out of concern for their businesses and employees. In July, Bay area brewers shared an open letter asserting that at least 100 of more than 320 small businesses in the craft beer industry are likely to close if the order remained in effect.

"The health of our community is paramount, but it cannot be at the life savings of hundreds of entrepreneurs, the livelihood of hundreds of families and the majority of an entire industry," it said.

While medical experts understand the pressure and stress the closures have put on businesses they warn that were are not out of the woods yet, and that common sense enforcement is key.

"At 50 percent occupancy, it's a little bit easier than if you just let everybody in...it's going to be their responsibility to say okay folks if you're coming together you can stay together, but we're encouraging you to keep social distancing the best you can and we'd like you to wear masks," Dr. Jay Wolfson, Senior Associate Dean for Health Policy and Practice at the USF Morani College of Medicine said.

Florida bars 🍻 are opening back up again, all while the @CDCgov has new research showing the risks of going out to eat and drink. A @USFHealth expert I talked to said the move is understandable, but the responsibility falls on you 😷 #Nightside @10TampaBay pic.twitter.com/ks48sSh5N7

Dr. Wolfson highlighted how reopening bars in June showed to be a "mistake" due to the rise in cases the state saw in the following two weeks and hopes this time shows a different outcome.

"The goal here is not just to open them up, but to monitor and manage as you do this," Dr. Wolfson said. "We've talked about this as well, being able to keep tabs on what the pulse looks like and if we see outbreaks, we begin to control them."

Overall, Dr. Wolfson said on a personal level it's about being safe and careful while having a good time and for the state, it's about monitoring the reopening closely and punishing those who violate the guidelines.

While Florida is still seeing coronavirus cases in the thousands, the daily case count has seen quite a bit of variation since the initial closure of bars was put in place.

To compare: On June 26, the state saw 9,585 reported cases, according to the Florida Department of Health. Fast forward to a little more than two months later, the sunshine state appears to be trending in a better direction as it is reporting 2,583 cases for Sept. 9.

RELATED: Another 213 people in Florida have died from COVID-19, positivity rate stays around 5%

Pinellas County Mayor Rick Kriseman responded to the announcement on Twitter saying, "I've supported bars and breweries opening (with restrictions) here in Pinellas. Let's be responsible so they can remain open."

10 Tampa Bay has reached out to Mayor Jane Castor's office for comment. 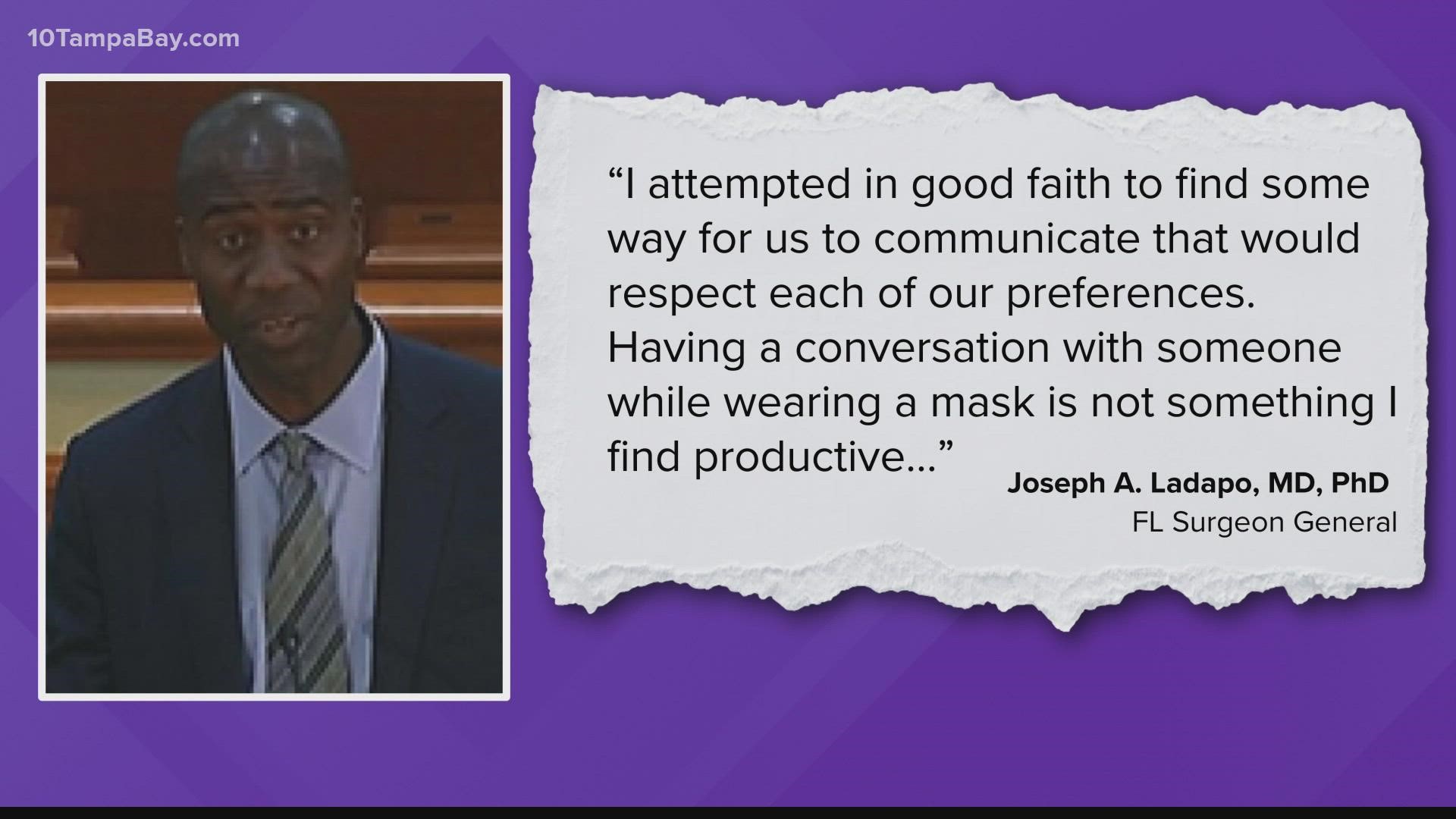