Get in the spooky spirit with super scary haunted houses, ghost tours and family-friendly trick-or-treating. 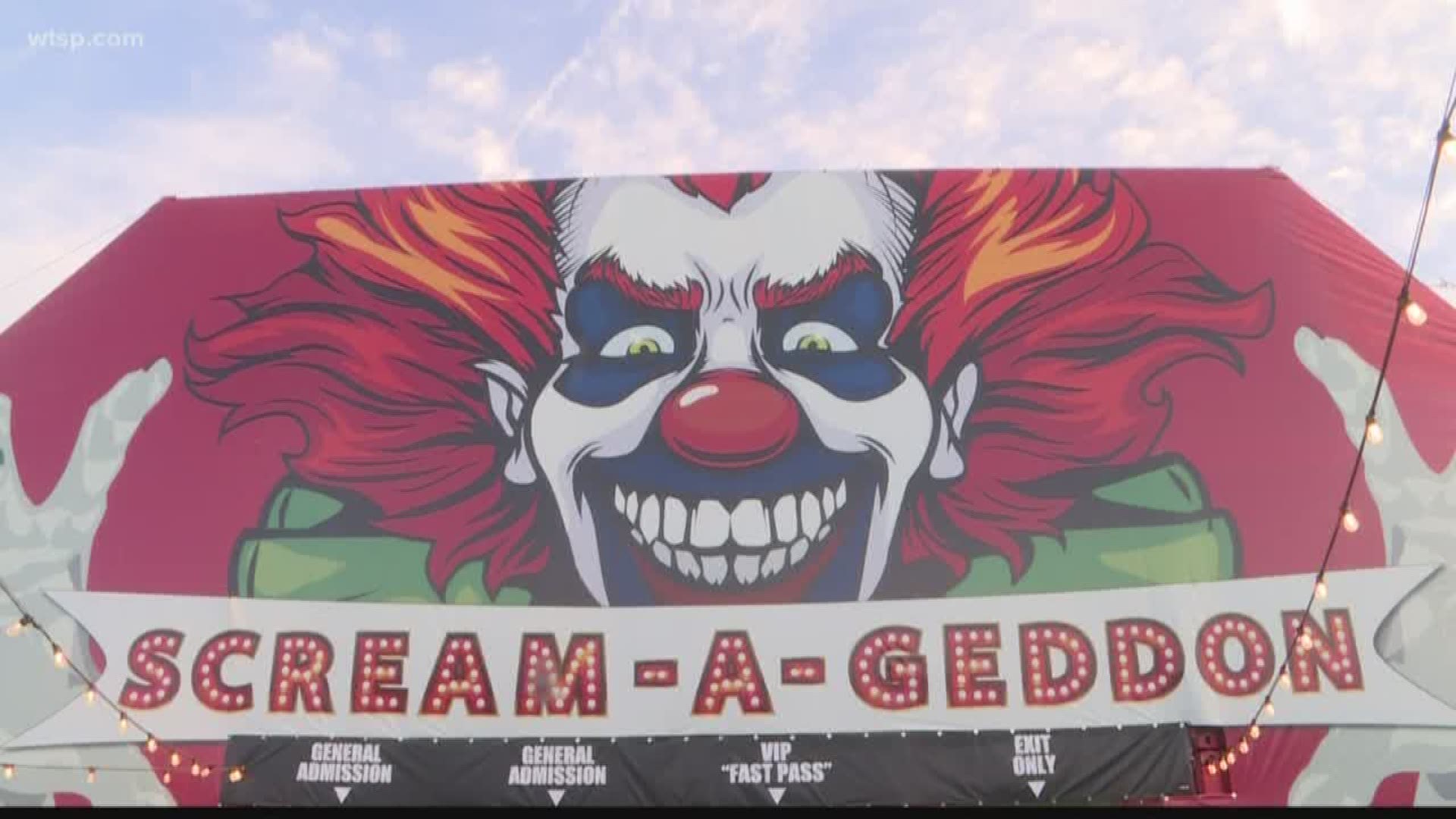 The Annual Venice Lions/Venice MainStreet Children's Halloween Parade will be held on Thursday, Oct. 31, with parade participants asked to gather at 4:30 p.m. in Centennial Park. The parade down Venice Avenue will begin promptly at 5 p.m. Both sides of W. Venice Ave., from Nokomis Ave. to Harbor Dr., will be closed for the event from 4:30-7 p.m. Volunteers will direct the crowd as it disperses from the parade and help the children cross between westbound and eastbound W. Venice Ave. to trick-or-treat for more goodies at stores along the avenues. Venice Police will also be on hand to assist.

The City of Gulfport’s Recreation Division will host the 2019 Spooktakular Halloween Bash on Thursday, October 31st at the Gulfport Recreation Center located at 5730 Shore Blvd. S. All the spooktakular festivities will begin at 7 p.m. The bash will include Trunk-or-Treat, a frightful Haunted House, a Boo-Room for toddlers, carnival games with candy/prizes, a Haunted Snack Shack and a Costume Contest for the children and their family. The Costume Contest will begin at 8:00 p.m. The fun ends at 9 p.m. Learn more here.

Fall Festival and Trunk or Treat

University Area CDC is hosting a FREE Fall Festival and Trunk or Treat on Thursday, Oct. 31, from 6 to 8:30 p.m. Participants are encouraged to dress up in Halloween costumes and visit car trunk to car trunk to collect yummy candy and fun treats. Additional fun activities, such as face painting, games and even a bounce house will be on hand. Children under 13 must be chaperoned by adults. Questions about this event should be directed to Diana Diaz, at 813.558.5212 ext. 316, ddiaz@uacdc.org.

Busch Gardens Howl-O-Scream celebrates 20 years of screams this year. The annual fright fest returns select nights Sept. 20 through Nov. 2, and just announced the return of two popular haunted houses. Both the gory Simon's Slaughterhouse and the pirate-themed The Black Spot will return to this year's event. More houses will be announced soon. The Tampa theme park also offers a 22-night season pass for Howl-O-Scream for $59.99. Find tickets and more information on Howl-O-Scream here.

Halloween Horror Nights is back at Universal Studios for a 29th year. There are 10 haunted houses, five scare zones and two spooky shows to fill the night. Some of the most popular houses this year include Jordan Peele’s “Us,” “Ghostbusters” and “Stranger Things.” Halloween Horror Nights runs select nights through Nov. 2. Single night tickets start at $67.99.

Running select nights through Nov. 1, Disney World’s ticketed Halloween party features exclusive desserts, snacks and merchandise, a Hocus Pocus show at Cinderella's Castle, the Boo To You parade featuring the headless horseman and a new nighttime fireworks and projection show hosted by Jack Skellington. And, everyone is allowed to dress up in costume and trick-or-treat around Magic Kingdom. Tickets start at $85.

RELATED: We went inside Star Wars: Rise of the Resistance before it opens. Here's what it's like

Scream-A-Geddon returns to Dade City for the fifth year with a monster midway, terrifying scare zones and a zombie paintball haunted hayride. This indie Halloween haunt is set in a creepy, rural part of Pasco County and also includes six haunted houses filled with more than 140 scare actors. New this year is Bonzo’s Beer Garden, run by a murderous clown who is into craft beer brewing. The only good news: his bar is stocked with local craft brews. The event runs Fridays and Saturdays and then every night Oct. 1 through Nov. 1. Tickets run $21.95-$35.95.

RELATED: Get your scare on at Scream-A-Geddon

The family-friendly event at SeaWorld in Orlando features a new Sesame Street parade, trick-or-treating during the day, a Halloween-themed Pet’s Ahoy show, a dance party along the Trick-or-Treat Trail and chances to meet a mermaid. Kids age 3-9 get in free with every paid adult ticket ($104.99). There’s also a separate ticket character breakfast with Count von Count, and during the weekend adults can indulge in the Craft Beer Festival. The Halloween Spooktacular runs weekend days through Oct. 27.

Legoland in Winter Haven has Halloween fun during weekends in October. There will be a Brick-or-Treat trail, Lego Halloween characters like Lord Vampyre and Rockin’ Frankenstein, a scavenger hunt to find the Lego Candy Corn and the Tale of the Pirates’ Cove fireworks show where even the fireworks are shaped like Legos. Brick or Treat is included with park admission and runs during park hours on weekends through Oct. 27.

ZooTampa Creatures of the Night

The family-friendly event at the zoo returns every Friday and Saturday in October. New this year is the Twisted Tale Trail and Rising Waters, which are not-so-spooky haunted trails that tell a story. Returning this year are Medusa’s Stone Cold Cave, Enchanted Fairy Meadow, Pigpimples School of Mystery and Mayhem and the Pumpkin Palooza for the youngest guests. There’s also a mummy dance party, a trick-or-treat scavenger hunt and Halloween themed treats. Zoo members get in free, and general admission starts at $26.95.

The annual Halloween comic-con heads to Tampa this year for four days of horror guests, a tattoo festival, a film festival and costume contests. This year’s celebrity guests include Elvira (Cassandra Peterson), Mia Farrow, Alice Cooper, Clive Barker, Sam Raimi, Bruce Campbell, Twisted Sister and more. The exhibitor room will also be full of spooky vendors and crafters from around the country. Single-day passes start at $20 with multi-day and VIP packages available. The convention kicks off on Oct. 31 and runs through Nov. 3 at the Tampa Convention Center.

Tampa’s historic and reportedly haunted movie house hosts 14 nights of movies and live shows beginning Oct. 18. The Halloween fun kicks off Oct. 18 with the Ghosts of Tampa Theatre Tour and the Last Podcast on the Left live show. Other film screenings include “Hocus Pocus,” a live interactive showing of “The Rocky Horror Picture Show,” “Little Monsters,” “Us,” “Psycho,” “Halloween” and more. Film screening tickets start at $10. General admission for the ghost tour is $15.

UNDead in the Water at American Victory Ship

The historic WWII cargo ship docked in Channelside turns into a terrifying haunted maze beginning Oct. 4. You’ll get to traverse multiple decks of the ship armed with only a blacklight flashlight while you try to escape from infected zombie stowaways from the Ripper Squad. The event runs Friday and Saturday nights plus Halloween through Nov. 2. Admission is $15 for adults, $13 for military, veterans and first responders.

One of the most popular fall festivals around celebrates its 28th anniversary this year. Festival dates are Oct. 12-13, 19-20 and 26-27. Alongside the massive corn maze and pumpkin patches are live music, a craft show, scarecrow displays, hayrides, a petting zoo, a butterfly garden, train rides and homemade food and desserts. Parking is $5 and admission is $10. Kids 10 and under are free.

The Florida Aquarium hosts its two-day Guppyween on Oct. 26 and 27. The event is sort of like Harry Potter under the sea, with Harry Otter hosting at Codwarts School of Fishcraft and Squidery. There will be trick-or-treating around the aquarium, chances to get sorted into Codwarts Houses and chances to further your “Fishcraft knowledge.” Tickets are $10 for kids in costume and regular admission price for adults.

The aquarium also hosts a sensory-friendly Guppyween the morning of Oct. 26 with a meet-and-greet opportunity with Tango the sea turtle mascot.

The official Ybor Ghost Tour is expanding its schedule for the Halloween season with Sunday night tours. New tours run select nights Oct. 6 through Oct. 27 and include an extended exploration of the Cuban Club, which was named one of the most haunted buildings in the U.S. by the Travel Channel. The tour runs about 120 minutes and includes stops at the Don Vincente Inn, cigar shops, the Cuban Club and other reportedly haunted spots around Ybor City in Tampa.

The Polk County Sheriff’s Office hosts four nights of haunted jail tours this year to benefit United Way of Central Florida. The tours run 6-10:30 p.m. Oct. 18-19 and Oct. 25-26. For the younger ones, there will be a separate room for trick-or-treating and games. Tours are $6 donations to United Way.

Pasco County Parks will have a month of Halloween offerings for all ages, including movies, crafts, hayrides, games, bounce houses and plenty of candy. Teens and adults who like to be scared can try out the Haunted House on 41 or a bone-chilling evening at Scream Acres.

Click here for a complete calendar and more details.

RELATED: Impress all your neighbors with these 10 fun family Halloween costumes

RELATED: Halloween is around the corner, and these body paint kits are sure to make an impression