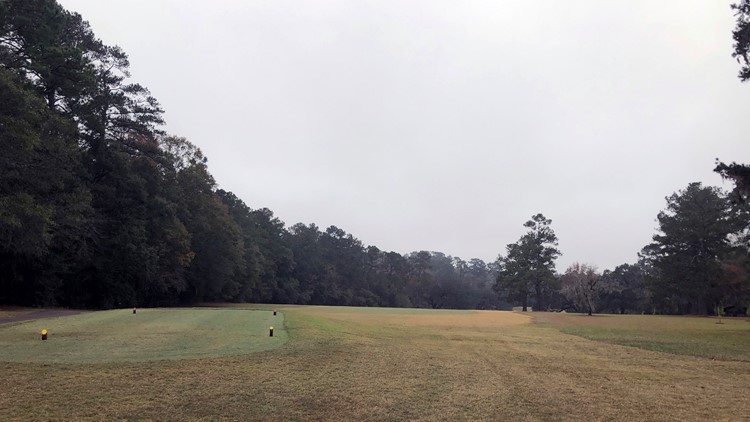 Photo by: AP Photo/Bobby Caina Calvan
An unmarked cemetery at the Capital City Country Club in Tallahassee, Fla, is shown on Dec. 17, 2019.

TALLAHASSEE, Fla — Forty graves believed to belong to Leon County slaves were confirmed earlier this month at the Capital City Country Club in Tallahassee by the National Park Service.

Any markers are long gone, but a series of depressions in the ground along the western edge of the 7th hole proved to be the resting place of men and women who worked as slaves on the Edward Houstoun Plantation, according to the Associated Press.

The findings come at a time when forgotten- or erased- African-American cemeteries are being discovered at what seems like regular intervals in the Tampa Bay area, shining a light on the way black lives – and deaths- were regarded in decades passed.

According to WCTV, the NPS offered to search the golf course for rumored grave sites this past summer. Using ground-penetrating radar along with two human remains detection dogs, they scoured over 7,000 square meters of the property.

That’s when they found the buried bodies. NPS cites other areas where graves could be, but they can’t check due to heavy growth in a wooded area.

Leon County had the densest population of slaves in Florida in 1840, with 70 percent of those living in the county being enslaved, according to a report on the Edward Houstoun Plantation -- including a discussion of an unmarked cemetery on former plantation lands at the Capital City Country Club.

That report from April 2019 looks at the unmarked cemetery on the former Edward Houstoun plantation -- turned country club -- and says that the graves likely not only belong to slaves but also may include those who stayed on as tenant farmers after the civil war was over.

The report also says marked graves were on the site through the 1930s. The man who bought the property from the Houstoun family in 1907, George B. Perkins, developed some of the land for a 9-hole golf course, though it is not believed the original golf course was in the same place where the cemetery was.

Then, in 1935, the golf course was expanded to 18 holes. By the time it was completed in 1937, the cemetery had been overtaken by the golf course, according to the report.

It is not immediately clear what will happen at the sites of the re-discovered graves, but there are no plans to move the resting places of the former slaves.

The general manager of the course sent the following statement to WCTV:

“As the oldest golf club in Tallahassee we have a unique appreciation for history. Like many communities across our country Tallahassee’s history is complicated, but it’s important to understand how the story all ties together.

Being located in our city’s only historic district means that our club’s history has many layers. Native American’s have lived here, Desoto camped here and celebrated the first Christmas in America, there was a large plantation with slave labor, and now there is a thriving historic neighborhood with incredibly beautiful open spaces including the golf course. We see ourselves as stewards of all that history.

We work hard to preserve these lands for recreational use and are excited to better understand and acknowledge how our community history has shaped the current environment. We hope people will want to spend time here - the club is open to the public and a great place to enjoy the beauty of Tallahassee. We hope people will join our club as a means for preserving and appreciating the Tallahassee story and all its chapters.“