The SunPass maintenance was supposed to last from June 6-11. Nearly six months later...its still a long way from functionality. 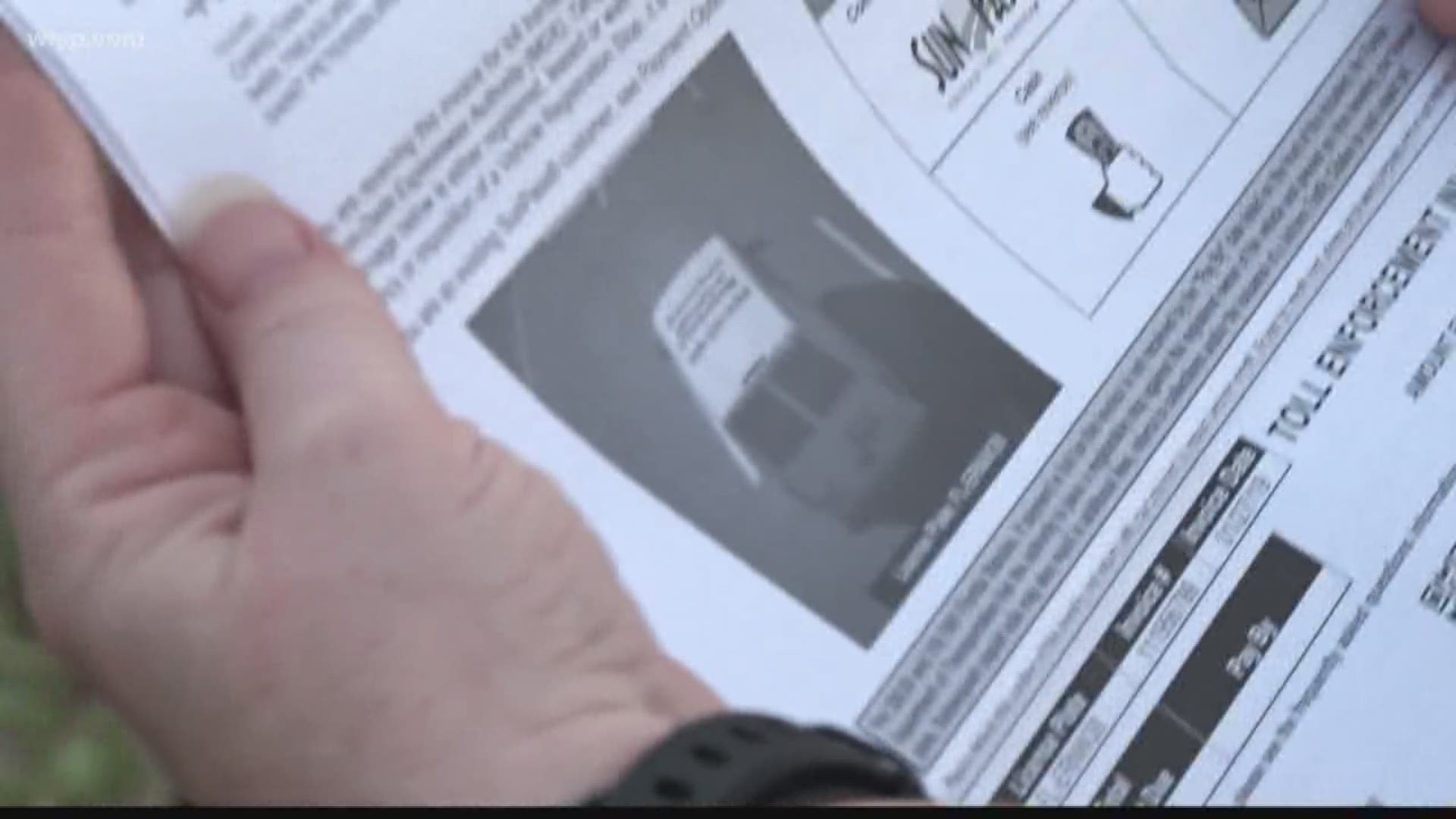 SendTo10: Email your SunPass bills and problems to 10News at tips@wtsp.com.

January 23, 2020: Your SunPass account could be turned over to collections if it is not current. Drivers who use toll-by-plate or SunPass will want to log in to their accounts and check the balance. They had suspended sending accounts to collections for a year and a half when there was a huge issue with upgrading their software systems. Other toll authorities like the Tampa Hillsborough Expressway Authority have sent accounts to collections.

May 21, 2019: The Tampa Hillsborough Expressway Authority (THEA) said its collection agency vendor, Credit Protection Association LP, will continue to send collection notices to customers who have not paid their tolls after receiving two notices despite a governor’s order to suspend late toll fees and penalties through June 1.

March 29, 2019: Gov. Ron DeSantis and Florida Department of Transportation Secretary Kevin Thibault will fine Conduent $4.6 million for the billing backlog that has plagued the Sunshine State since June 2018 and announce the state will continue to suspend toll-by-plate fees and late penalties, for tolls that occurred through the end of December, until at least June 1.

March 12, 2019: 10News continues to investigate problems with SunPass after more viewers claim they're getting bogus bills they believe are meant for someone else.

March 11, 2019: A man in Frostproof said he's been receiving bogus bills for a car he hasn't driven on Florida roads in two years.

March 1, 2019: Newly appointed Florida Department of Transportation Secretary Kevin Thibault issues a letter saying within two weeks of taking the job, he directed resources to address any issues with the SunPass centralized customer service system and acknowledging the negotiation team had some concerns about the vendor Conduent but felt the company would be able to fulfill the contract.

Feb. 15, 2019: One woman in Indiana reached out to 10News after her family received a bogus bill.

Jacqueline Tanner said her parents in Riverview received a bill for $2.14 addressed to her husband for a vehicle that was totaled seven years ago. According to the SunPass statement, that car was on a Florida road in July of 2018.

Jan. 9, 2019: The Florida Department of Transportation says a bogus email is being sent to Floridians, asking them to pay past-due SunPass tolls.

The message includes a link to an invoice. But, it can't be real because the state doesn't send toll invoices by email. Those are only sent through U.S. mail.

Nov. 26, 2018: The state continues to miss its mark on mailing Toll-by-Plate invoices, which are now nearly six months delayed. And despite 10Investigates' discovery that FDOT could make contractor Conduent pay any transactions older than 120 days, the agency appeared unaware of the clause in its contract...and says drivers will still be responsible for all backlogged tolls. No word yet when those bills will be accurate enough to invoice.

Oct 1, 2018: 10Investigates reveals Conduent may have compromised six million customers' accounts by leaving a test site on the unsecured internet . The state never alerted customers, and it doesn't seem to know if accounts were accessed by malicious parties. Meanwhile, FDOT still doesn't know when it will be able to send out its toll-by-plate bills, now four months delayed.

Sept. 25, 2018: 10Investigates digs into why tolls are still being charged on roads that are paid off. A day later, Democratic gubernatorial nominee Andrew Gillum takes to Facebook to declare, "More toll roads are not the answer."

Sept. 8, 2018: As the SunPass Saga hits its 99th day, FDOT's secretary finally apologizes and says his agency dropped the ball. Intreped reporters ask, "Is it too late now to say sorry?"

Aug. 24, 2018: 10Investigates reveals the state has still not disciplined any FDOT employees or threatened any fines against its general consultants in charge of managing the botched SunPass upgrade. Some Republican lawmakers privately confess they're sitting on the sidelines until after the November election, while Democrats complain they can't get answers from state staffers.

Aug. 22, 2018: 10Investigates details how some customers are waiting on hold to speak to a SunPass representative for FOUR HOURS. And FDOT admits tens of millions of toll transactions won't be mailed out to Toll-By-Plate customers until October.

Aug. 20, 2018: 10Investigates reveals FDOT and contractor Conduent compromised customers' personal data, but didn't tell the public of the problems. The state puts out a press release criticizing 10Investigates' report, but takes great liberties with the truth. Responding to the story, Sen. Bill Nelson expands his request for an FTC SunPass investigation.

Aug. 14, 2018: After two months of questions, Gov. Scott finally announces an inspector general investigation into the SunPass disaster. The state also finally cleared its massive backlog of nearly 200 million toll transactions and announced an $800,000 fine against Conduent's $343 million contract. The news comes four days after 10Investigates asked Gov. Scott for a fourth time about the lack of accountability.

Aug. 2, 2018: In his third interview with 10Investigates on the SunPass topic, Gov. Rick Scott says refunds will be issued to customers whose bank accounts are overdrafted due to unpredictable toll charges. It takes two weeks for refund applications to go online. Scott still has no answer for why an investigation has not yet been launched and why no fines have yet been assessed.

July 30, 2018: U.S. Sens. Bill Nelson and Gary Peters call for a federal investigation into Conduent for mismanaging the toll system in several states. The two senators sent a letter to the Federal Trade Commission urging the agency to take action against Conduent.

July 25, 2018: 10Investigates reveals Gov. Scott was fundraising with the founder of Conduent in the weeks leading up to SunPass' failed launch, as well as with Conduent's top lobbyist, Brian Ballard, a friend of Scott's. FDOT also confirms for the first time 10Investigates' reports that more than 100 million toll transactions are backlogged (170 million, to be more accurate). The governor indicates he's satisfied with FDOT's handling of the crisis.

July 18, 2018: Internal FDOT emails, obtained by 10Investigates, detail coordinated efforts among agency executives to downplay SunPass' growing problems. Hours after the story went live, FDOT announced a consultant who suggested more transparency would no longer be working for the agency. Democrats in the state legislature call on the governor to launch an investigation and terminate Conduent's contract.

July 17, 2018: Even though FDOT Secretary Mike Dew said its contractor would not receive any more money during the crisis, 10Investigates reveals FDOT continued to pay Conduent hundreds of thousands of dollars from other contracts and subcontracts, even as it was flirting with default on its SunPass contract.

July 5, 2018: Documents obtained by 10Investigates reveal the state of Florida continued to award contractor Conduent more money while problems with the new system's expected launch mounted, growing a $287 million contract to more than $343 million. FDOT was also cited in a post-procurement audit for not putting proper financial penalties in place in case Conduent failed to fulfill its contract duties. The documents were obtained by 10Investigates through the state CFO's office when public records requests to FTE/FDOT went unanswered.

June 28, 2018: The state continues to ignore specific 10Investigates questions about the SunPass system failure and plans for restoration, but FTE and FDOT put contractor Conduent on notice the contractor is in danger of defaulting. Payments are halted on the lucrative contract.

June 26, 2018: 10Investigates exposes the troubled background of Conduent, the contractor in charge of the "six-day" maintenance project and how Florida likely had knowledge of the issues in at least four other states.

Even though the state continues to say it is withholding processing "to better serve the customer and avoid unintended consequences" - and it won't release numbers of its transaction backlog - 10Investigates reports FTE is not processing tolls because it is unable and 26 days of inactivity likely has the state 100 million transactions behind.

When asked about the problems, Governor Scott tells 10Investigates he will make sure FDOT does its job.

June 21, 2018: As the state continues to downplay the extent of its SunPass problems, 10Investigates reports more than 50 million toll transactions are sitting in a computer backlog. In response to continued questions about the customer service problems, FDOT announces it will waive all late fees and penalties incurred by drivers.

June 19, 2018: 10Investigates breaks the news that millions of toll transactions are going unprocessed and despite state claims of website restoration, customers continued to report problems accessing their accounts and receipts they need to document expenses. In response to 10Investigates questions, FTE sends an email to all customers assuring that it will soon process transactions, "which is anticipated to begin as early as the end of the week."

June 13, 2018: 10News starts covering the frustrations of SunPass customers who cannot access their accounts online. The Florida Turnpike Enterprise blamed the problems on a "high volume of people trying to log onto their accounts."

June 1, 2018: SunPass suspends toll processing ahead of anticipated rebuild that will give system new capabilities, including parking transactions at major Florida airports and stadiums, as well as moving Florida closer toward national interoperability. Toll charges are recorded, but not processed to customer’s accounts.

Want to view an interactive timeline of the SunPass maintenance woes?  Click or tap here